Why are these women smiling? 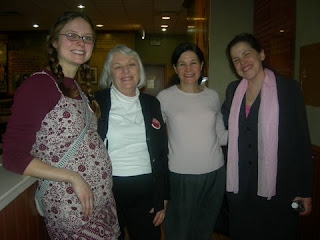 My friend Rosalie (the woman with the white hair, a Catholic Worker and retired professor of English) and the three other women, one of them pregnant, engaged in a three-part action (education of the public, education of Senator Durbin of Illinois and his staff, and nonviolent resistance) in Chicago earlier this week. More later from Ro's letter, "Putting My Body Where My Voice Is," with quotes, information, and links. The photo was taken before the action.

The four are part of a group of twenty, "the Well Behaved Women," who took part in the education and lobbying action at the Federal Building in downtown Chicago, protesting Senator Durbin's plan to vote "Yes" on President Bush's Supplemental Appropriations Bills. Code Pink gave broader support to the action, which was also part of Voices for Creative Nonviolence's national action that day. The four, Rosalie, Katie, Marjorie, and Laura, were arrested.