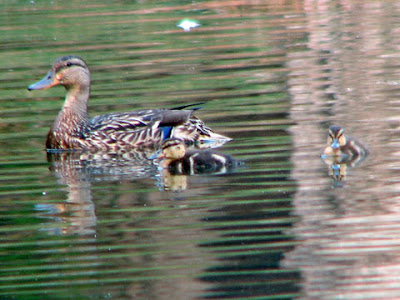 So, back in steamy Greensboro (UGH!), we have the ever faithful Greensboro Birds blog --not that we didn't consult it on the road once in a while-- and in this muggy weather it is good to see that there is some loveliness here. I miss California and even Boston, which though muggy, has the Atlantic coast nearby.

But we have baby ducks. (Padre Mickey and Grandmère Mimi will like the cuteness factor.)

Off to a gig at a big United Methodist youth conference. Mine isn't a musical gig, but my friend Li'l Flava's expression probably applies; when she was an impoverished Ph.D. student and plying her excellent music skills at a variety of congregations of at least three different Christian communions, she used to refer to her occupation as "giggin' for Jesus."

My car is, of course, sporting the family bumper stickers: on the left, "The Episcopal Church welcomes you;" on the right, "La Iglesia Episcopal le da la bienvenida."

* Factoid on bumper stickers: Mostly, they're not my thing. But I have had a very few on various cars, most recently (meaning in the last decade or so) one that said "The labor movement: the folks who brought you the weekend." And about 12 or 15 years ago, "Vinnie Greco's Powerhouse Gym." For my local gym in Watertown, Massachusetts, which had a wooden floor, a bunch of body-workers, a snooty factor of zero, and really was run by a guy called Vinnie Greco, a big beefy fellow. Sigh. At my current gym, the managers and trainers all have hair gel.
Posted by Jane R at 5:44 PM

My favorite, seen parked on the street in front of the GTU bookstore: "Ordain Women... Or Stop Dressing Like Them."

(You can get it from the Northern Sun catalog.)

One of the bumper stickers of the Catholic women's ordination movement is "Ordain Women or Stop Baptizing Them." Hadn't heard of the dress one -- makes sense though.

I have a shield (TEC) and a "I'm a (proud) Vietnam Veteran"--what my daughter calls "Ketchup and Mustard", the colors of Vietnam Cong-Hoa, the Saigon "government". I found my way to help through one I saw after about two weeks: Christmas, 1984, in Nowhere, Connecticut, looking for a gig, which was hard without playing an instrument, though I "sing a little", as a certain formerly young veddy rich Brit said. I don't like it much; it is a temptation to road rage for me.

The obligatory "Bring Them Home Now" since '03, of course. Asshats.

I have never done bumper stickers - ever. I should get the church sticker and the "Bring Them Home Now".

Johnieb, your voice is an instrument if you "sing a little".

If I did more stickers than two, I'd be plastered. I know. Please leave the stage.

I'm not much of one for bumper stickers either, although I was tempted by "If you're not angry, you're not paying attention." I did once have a simple rainbow flag sticker, since it was pretty enough to serve both as a decoration and a statement. How gay is that?

How gay is that?

Very gay, Ed. There's no way you'll ever get your credentials revoked :-).

I think the sticker I've seen reads "If you're not outraged, you're not paying attention." "Angry" isn't quite enough for the current climate.

On my bumper: an Episcopal Church shield and a AAA sticker so they know who I am when the car breaks.

One I refuse to display: a sticker that reads "Still crazy after all this sobriety." Why tempt fate?

Oh, in case anyone thinks Rudolf Giuliani is the solution to anything, read this month's Harper's.

The Vietnam Veteran sticker I regarded as a temptation as a license to act crazy: "poor thing can't help it." My friends are harder to impress. Thank God for them.

My brother and his daughter are attending the big Methodist thing. If you see a mouthy guy from Missouri, tell him I said hi.

Geez, I should write about ducks and bumper stickers all the time. Gets me a lot more traffic and comment than theology ;-).

lj, I was only at the big Methodist thing till early this evening. It was a translation gig (!) and they didn't need me for the rest of the gathering as it turns out. It was a pretty amazing event. I'll blog about it if time allows. Last night's worship service was part rock concert, part pep rally -- though I gather they also had more quiet worship options (labyrinth et al.) at other times. Hope your brother and his daughter are having a good time!

Heck, I do write about ducks and don't get this many comments! Maybe I should have included something about bumper stickers.

No bumper stickers on our car. That's too much of a commitment.

It's my progressive religious posse, I think. ;-)

Thanks for stopping by, Iris! Those ducklings sure are cute. The parent duck is beautiful, too.

I know what you mean about bumper stickers. I tend to shy away from them, as you read in my post. But since I'm a professional religious type (among other claims to non-fame) and I'm happy to be part of a community that is welcoming and inclusive (and that by the way, strives to be environmentally friendly) and also not fundamentalist, I thought I'd do a little p.r. No hard sell, though. Just a little countercultural statement. And I walk as much as possible to listen to the birds :-).

I just know that as soon as I slap a sticker on the car I'll change my opinion and then be challenged with the task of getting the thing off. I have toyed with the idea of making magnetic bumper "stickers." Then I'd be free to crank out my ever-changing viewpoints or funny-to-me one-liners whenever they strike.

You could have a bumper sticker made with a bird and the URL of your blog... Or you could have magnetic "bird of the week" stickers -- but magnetic stickers would probably slip off. Then again, some tech-y person can probably figure something out and make a mint off that invention.

I never thought of bumper stickers as signs of Deep Commitment. Hmmmm...

They sell magnetic material; you just stick the sticker on it and cut it out with scissors. Good if you're not sure you'll want to keep it, or if you have too many and want to rotate them.

One potential problem with easily removed bumper stickers, though: someone stole my rainbow fish!