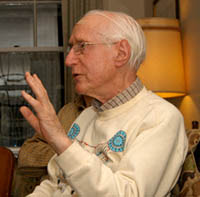 One of the great ecumenists of the 20th --and early 21st-- century has died very suddenly. I just learned this from the Catholic Theological Society of America mailing list. It is so soon after his death that there are no obituaries yet. But because of his role at the Second Vatican Council (he was a peritus, an official theological expert, appointed by Pope John XXIII) and his wide-ranging scholarly and ecumenical work, there is a substantial biography, with photos, bibliography, and other information, here.

May the angels sing him to paradise. Rest in peace, brother George, and rise in glory.
Posted by Jane R at 2:54 PM

Theologians like George Tavard are becoming an endangered species in the Roman Catholic Church, more's the pity.

Endangered but still very much alive. I see them every June at the Catholic Theological Society of America. In fact, the new president of the CTSA is an ecumenist, and a woman, Margaret O'Gara. Not like Tavard, a grand old man of Vatican II, but an ecumenist nevertheless, as is my friend Jon Nilson, a CTSA past president (who also, as a white man, does a lot of work on race these days and has a book coming out on Catholic theology and race) serving on the U.S. committee of the Anglican-Roman Catholic dialogue. Not that they don't worry about the shape and existence of the group, given everything that's going on (on the Anglican side as well as the RC side!). But it's there... and of course is a direct legacy of the grand old men like Congar and Tavard, and John XXIII and Paul VI.

Oh, and Margaret is not only an ecumenist and a woman, she's also Canadian, or at least she teaches in Canada. She's from the U.S. originally. Her father was editor of Commonweal.

And I see that Tavard blurbed her book :-)

Catherine Mowry LaCugna, of blessed memory, wrote an interesting piece a couple of decades ago on how large the number of Catholic women theologians was these days; she attributed this in part to the fact that women couldn't be ordained and thus directed their energies toward the work of theology. And in fact, there is a large, large number of outstanding (and broadly well regarded) Catholic women theologians -- among the best-known: Elizabeth Johnson, Catherine Mowry LaCugna, M. Shawn Copeland, Sandra Schneiders (a biblical scholar, but she also does theology), Maria Pilar Aquino, Christine Firer Hinze (theological ethics / moral theology), Lisa Sowle Cahill (ditto), Barbara Hilkert Andolsen (ditto), Mary Catherine Hilkert (she and Barbara are sisters!), Susan Ross, Ivone Gebara (Brazilian), Virginia Fabella (Filipina), Gemma Cruz (Filipina, living in U.S.), Teresa Berger (she's German but teaching in the U.S.), and of course Rosemary Ruether, who hardly ever attends CTSA meetings any more but is still very much a Catholic. Mary Hunt is also Catholic, but doesn't bother with CTSA. And on and on. Biblical scholars too (besides Schneiders, Carolyn Osiek, Dianne Bergant, Elisabeth Schüssler Fiorenza, etc.) There are some pretty good men too :-). (The newly elected Vice President --which means he will be President in two years -- is an African American moral theologian (ethicist), Bryan Massingale, who is top-notch -- and quite courageous in his writings. (As is James Keenan, SJ, also an ethicist.)

I wish they all wrote more op-eds so people would get to know them. They do, many of them, give workshops and talks in parishes and on campuses and at conferences. But word doesn't get out.

And of course there is another crew of Catholic theologians who sing a different song.

Oops, sorry to be so long-winded. It's just that I'm hopeful about Catholic theology -- if not about formal institutional matters! The work is very much going on.

One thought about the large numbers of RC theologians is that they are less easily controlled than an ordained priest.

And then there are the hormones and the PMS that cause them to generally cut loose and run wild, and what can the pope do to them? ;o)

I meant to say "RC women theologians" up there.

BTW, Jane, would you include Jane Schaberg? I think I read she is/ was RC. (I'm currently finishing *Illegitimacy of Jesus*)