It's Ferragosto in Italy, a Roman (as in the emperor Augustus) holiday turned Marian, and in the Orthodox, Catholic, and Anglican communions worldwide it is the Dormition, or the Assumption, or the Feast of St. Mary the Virgin. I know an icon of the Dormition would be appropriate, or one of the Assumption, but several blogging friends have posted fine ones, particularly Grandmère Mimi (see the comments too) and Padre Rob+, and also, humorously, MadPriest, who has written one of his better captions. (Do not look at that if you get offended at religious humor. But really, it's quite brilliant.) And I'm short on bloggy research time this week.

What I do want to share, because I have it around and just love it, is a representation of Our Lady of Mercy, from Ravensburg (Germany), in the late 15th century. 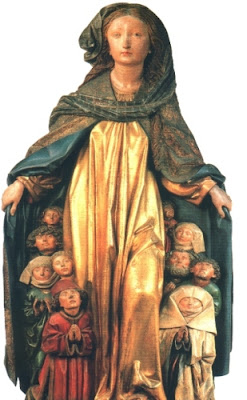 Also, à propos of Protestants and Mary (this came up in a comment on Grandmère Mimi's blog) , the latest hottest book on this is Blessed One: Protestant Perspectives on Mary. (See the handy "search inside" feature and have a look at the table of contents.) Some of you (Protestant or not) may be interested in having a look.
Posted by Jane R at 10:52 PM

That's a wonderful image: thank you.

Jane, it is a wonderful image. Why does it look better here than over at MadPriest's place?

(It is bigger here, too, but I don't think that's what you were talking about ;-))

The value of silence?

Or so I've heard.