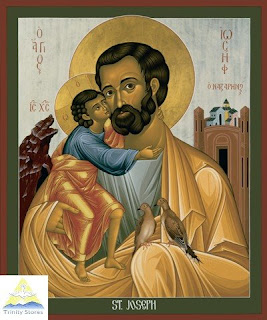 I have great affection for St. Joseph. I have a reproduction of this icon by Robert Lentz --which has the logo of the distributor in the lower left corner, sorry, it's a copyright thing-- in my home. I love the tender pose with Jesus and also the two doves. (Why two doves? This was the Temple offering of the poor. Families of greater means offered for sacrifice much larger animals.) And unlike most images of Joseph in Christian history, this one depicts a younger Joseph. Not a bad idea since Joseph, like Mary, was probably pretty young when Jesus was born.

The Catholic Worker movement also has a fondness for Joseph the Worker.

Note: The Catholic Worker website is down right now, but this site has some good information on the CW. Remember though, it's a Christian anarchist movement, so it's decentralized, and nothing replaces a visit to a Catholic Worker house or farm.


Father, husband, protector, worker: Joseph was a man of peace.

Four years ago today the U.S. war in Iraq began.

I found on the Web this image, which the site says is a detail from a statue of Joseph with doves. It seems apt for today. The website invites its viewers to meditate on the image. So I invite you. Peace be with you all. 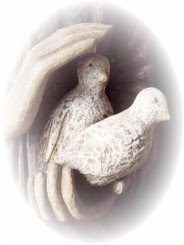