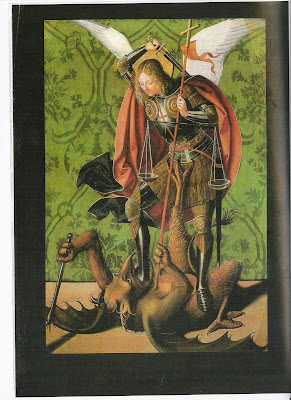 I have a vow of nonviolence, but sometimes, only the archangel Michael does the job. You know, with the sword and the dragon. He is a good guardian and defender for dissertations and for all manner of other nasty obstacles. How do I reconcile this with the commitment to nonviolence? Why, I don't.

I also developed a great fondness, over a dozen years ago, for the "angry Psalms" (the "smash my enemies" ones) but that is another story and I have chronicled the why and how of this in When in Doubt, Sing.

(Which HarperCollins let go out of print, and that is yet another story, but someday there will be a paperback from another publisher, in fact there should have been several years ago, but all this is more stories than I can bear to tell right now.) (Later note: Now there is a paperback! You can find it here or at another online place or get your local bookstore to order it.)


So here, for those in need of such things, is Michael the Archangel. In fact, several Michaels. Take your pick. Saint Michael and All Angels, pray for us. And help us slay those dragons.


(Cross-cultural note: the biblical traditions have nasty dragons but Chinese traditions have auspicious ones. In fact, I was born in the Year of the Dragon in the Chinese astrological calendar. But I digress.)


This one is at the top of Mont-Saint-Michel. It's an aerial photo, you'll never see him from that close unless you are a bird. It's a fairly modern statue, since the original and several of its successors were destroyed by the elements, time, and the French Revolution. 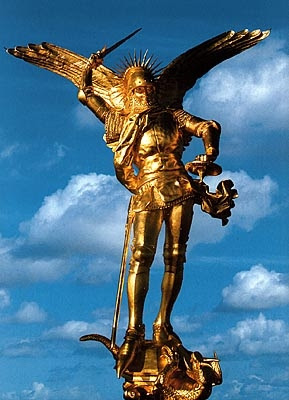 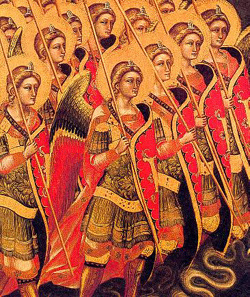 If you're really desperate, you can invoke the whole heavenly militia.


This one is like a deity straight out of India. 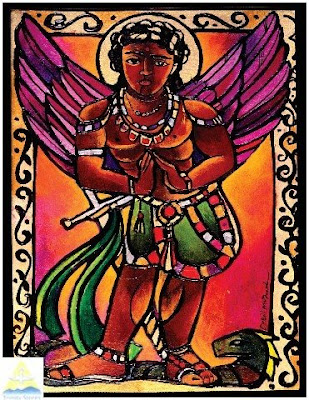 Arturo Olivas made this one. 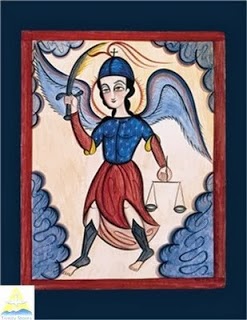 And here's your classic icon.

I especially like the Indian one. Thanks, Jane. I am glad you put this up.

I understand exactly the paradox. Michael the Archangel is a form of "release". We work so hard at the "humility" thing and "meek" thing and the "shut up and sit still and listen to the small still voice" thing (at least I know I do) in terms of me being more attuned to God's will, that once in a while, to do God's will, well...I have to get my dander up to do it...and Michael is a great icon for me at those times.

The other mental image I call up in those moments is "Jesus opening up a can of whoopass on the moneychangers in the Temple." Even Jesus had to get his dander up now and then!

Since I wrote this post over three years ago, a wonderful publisher did indeed reissue When in Doubt, Sing: Prayer in Daily Life, as many readers of this blog know, nearly two years ago. There is a hot sale on it right now at Sorin Books / Ave Maria Press (the publisher, in Notre Dame, IN), so you can get it cheap, cheap.

Now back to our previously scheduled archangel(s). This message brought to you by Hungry Writers, Inc.