from July 15: Olga and Vladimir 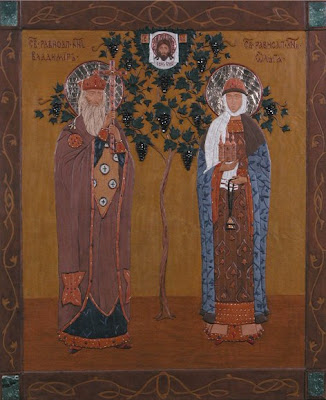 Yet another fabulous woman. I can't keep up. I just love the fact that on a single day we celebrate a woman and her grandson. Or, to put it the other way, a boy and his grandmother. How often do you see that kind of pair on a feast day?

My Russian is rusty (MadPriest, I wrote this just to get a rise out of you -- I actually only had a year and a half of Russian and it was 35 years ago in college) but if I read correctly, this icon is of Olga and Vladimir, patrons of the church in today's Russia and Ukraine. Why, you ask, does he look so old? Icons aren't meant to be realistic, and Olga and Vladimir didn't do their thing contemporaneously. Which is too bad, because the vision of an older woman and her little grandson bopping around performing a few miracles and talking about Jesus and spreading good deeds is kind of appealing.

According to St. John the Baptist Ukrainian Catholic Church in Newark, New Jersey, Olga was a clever woman and a devoted Christian:

The first Eastern Slav ruler to adopt Christianity was a woman, St. Olga. Olga converted to Christianity in Constantinople while she served as regent for her young son.

Olga returned to Kiev and unsuccessfully tried to get her people to convert to Christianity in her lifetime. Later on, after her grandson converted the nation to Christianity, Olga was made a saint.

Olga was unsuccessfull in converting her son Svyatoslav, a rather coarse fellow who spent a lot of time riding around on horses killing people. But her grandson Vladimir (Volodymyr in Ukrainian, which, come to think of it, how his name was spelled on the site where I found the icon, so it must have been in Ukrainian; same alphabet as Russian), whom she did not dare baptize as an infant, converted to Byzantine Christianity as an adult for serious reasons:

Olga's grandson, Prince Vladimir (called Volodymyr in Ukrainian), was the ruler of Kievan Rus who successfully evangelized the ancestors of today's Ukrainians. According to a legend recounted in the chronicle of the monk Nestor, Vladimir had representatives come from all the major religions. Vladimir rejected Judaism because the Jews were scattered around the world, with no homeland. Vladimir rejected Catholicism (then just Western Christianity) because of its fasts. Vladimir rejected Islam because "drinking is the joy of Rus." Finally, Vladimir accepted the Eastern style of Christianity and married the Byzantine princess Anna, shown here at Vladimir's left. Notice the water in the foreground the mosaic. The water represents the Dniepr river, in which Vladimir's baptism took place. 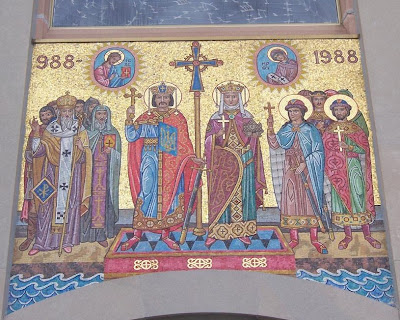 Vladimir's conversion took place in 988, when the division between Western Christianity (Catholicism) and Eastern Christianity (Orthodoxy), did not officially exist. Only after the Great Schism in 1054 did the Eastern Orthodox-Roman Catholic division became de jure and permanent. The Church in Kievan Rus at the time kept its Eastern Rite, but did stay in contact with the Pope. 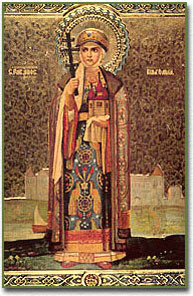 Two of Vladimir's sons, Boris and Gleb, were later martyred. This is a long family story.

When Olga was baptized, she took the name Elena (Helen in English, Yelena in Slavic languages). Scandinavians call her Helga.
Posted by Jane R at 11:35 PM