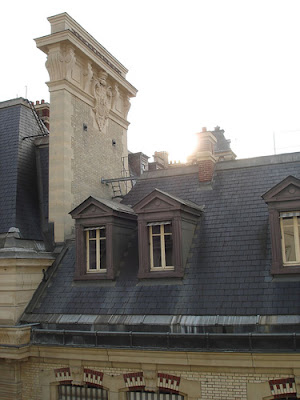 A peaceful picture to celebrate a violent event.

I love the roofs of Paris, a city where you can still see the sky. This photo is from a small hotel I found on the Web, in the Latin Quarter on the Left Bank.

On July 14, 1789, Parisians stormed the Bastille prison in a symbolic act of ending the rule of monarchy. The French Revolution itself was a much longer event, with philosophical antecedents, parliamentary dimensions, and, in the end, a lot of blood.

The words of the Marseillaise (the French national anthem) are pretty bloody, too, but I still love the tune, almost more than any other national anthem. Comes from being an American who grew up in France... Thanks to Counterlight, via Grandmère Mimi, for this rendition of it (by the Navy Band! Is it my imagination, or does it sound not quite the way the French do it?) and to Ormonde for the words and translation. And you all remember that great scene in "Casablanca." Makes you want to stand up in the movie theater and cheer.

On July 14 there is always a huge parade with a military display (ground troops and air force) on the Champs-Elysées in Paris, leading up to the Arc de Triomphe.

There are also fireworks and street parties around the country, and indeed in other parts of the world. (Boston has a big Bastille Day event every year.) In Paris the neighborhood street parties, which always involve dancing, are traditionally hosted by the local firefighters. 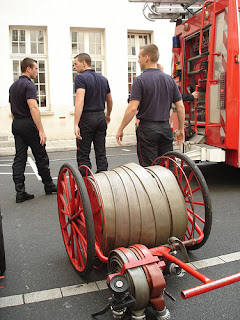 (That photo, besides offering local color, is for pj and Eileen and Grandmère Mimi and Luiz and Ed and...)

If you go to the website of the Paris fire department this week, you will see a posting about locations of the parties. In the old days, people found them without the Web of course.

Here is a little Tour de France info from some enterprising cycling folks. There are pictures, too.

And this little piece of France is a hoot. A couple of decades after the U.S., France, which is a very doggy place (in Paris you can bring your dog into a restaurant; though French dogs are as well-behaved as French children, who know how to cut their food with a fork and knife at age three and who don't squirm and yell half as much as American children, and no, they are not on drugs), has gotten into the pooper scooper business, and in Nîmes (in Southern France), they got all artistic about it and someone made this mosaic plastic poop-bag distributor. With Roman inspiration (that part of France has a lot of Roman ruins and all the cities once had Latin names). Only in France. 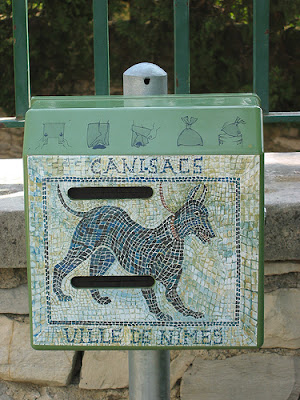 Thanks to Mosaic Art Source, which I discovered by chance and has fabulous French and other mosaics. (SVO, you will love this.)

All of these are secular scenes, on purpose. No pictures of pretty French churches. The French Revolution was secular and anti-religious, or at least anticlerical -- but often anti-religious too. The government remains adamantly secular, and you would never, ever hear "God bless France" at the end of a presidential speech, nor anything about prayer.
Posted by Jane R at 7:38 PM

Merci, tante Jeanne. This was the perfect Bastille Day post (at least for me). And thank you for the little present as well :-)

If you click on the photo, you can see a larger version. :-)

I already thought that for you, Eileen; please continue to enjoy.

Me neither, not picky at all...send one of dem dere Frahnszh cyoutees bah ahnee day.