Kiefer's piece on Elizabeth Cady Stanton (in the link above, from the Daily Office site) isn't very good and mentions neither her conversion experience and contact with Charles Grandison Finney nor her work on the Seneca Falls gathering on the rights of women in 1848 for which she is best known, and it doesn't do justice to her on The Women's Bible. 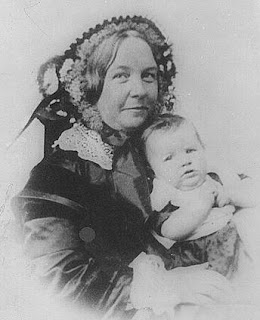 Here are two photos of Stanton, one as a young woman with one of her many children, the other as an old woman with her friend and colleague Susan B. Anthony. 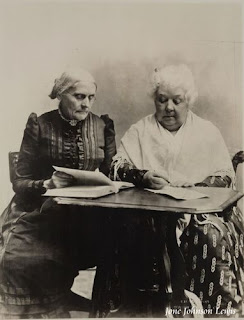 Work commitments prevent me from doing these women full justice here, even though they are some of my favorite women in recent history (recent meaning the last couple of hundred years), but here are some pictures. I'll add some more links about those pioneers of African Americans' and women's rights throughout the day. I teach about them in some of my classes (except for Amelia Bloomer, whom I must add somewhere!) so I have documents about them, but I'm headed back into heavy work days for both my summer writing and preparation for the semester's teaching. We should have added some labor activists! 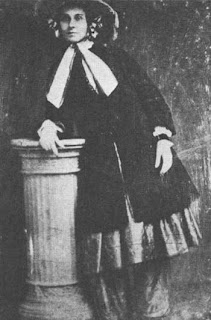 Read about Amelia Bloomer here. Here she is in her comfortable clothes; no hoop skirts or corsets!
She was also a churchwoman and one of the women's rights leaders at Seneca Falls. 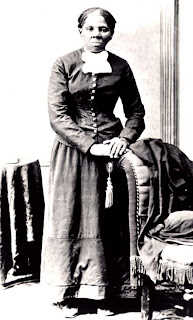 Read about Harriet Tubman here and here. (The second is a commercial site.) The photo is a later one, many years after she had served as a "conductor" on the Underground Railroad. 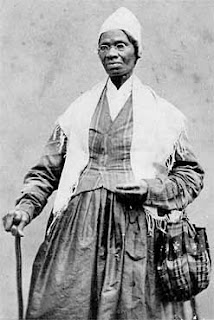 And here is the better-known photo of Sojourner Truth.
Posted by Jane R at 11:21 AM

How about Mary Heaton Vorse, or Elizabeth Gurley Flynn?

Wow Jane, you found some great photos.
This is a great month for women saints. At our Wednesday Healing Service I included Macrina with these four Saints.