July, as I have noted before, is a month of fabulous holy women in the calendar of the saints.

Today, July 19, the Episcopal Church invites us to celebrate Macrina, also known as Macrina the Younger.

Believers and theologians of both the Eastern and Western churches recognize and remember as "The Cappadocians" two Gregories and a Basil, three men whose influence on the spirituality of the church, the theology of the Trinitarian God, and the formation of monasticism --among many other aspects of 4th century and later church life-- is immeasurable. I always include Macrina among "The Cappadocians" when I speak of them.

Elder sister of two of the "Cappadocian Fathers," Gregory of Nyssa and Basil of Caesarea (the other Gregory was their good buddy, known as Gregory of Nazianzus), Macrina was so influential in Gregory's life that he wrote a biography of her. Named for her grandmother (Macrina the Elder), Macrina was really a proto-abbess. She founded a religious community in her home and presided over it with charity and steely will. Her faith commitment was rooted in that of her family. While she was born into a family of means, with land and property and money, she was also in a family familiar with the suffering that comes from commitment; some of her forebears had known persecution because they were Christians.

Today it is hard for most of us to understand an early vow of singleness and celibacy as a positive. For a woman of the ancient world (and later the medieval world) it was, however, an alternative to submission to a man, multiple pregnancies, and early death in childbirth; put more positively, it was a path to cultivating the life of the mind, the life of the spirit, and life in community. 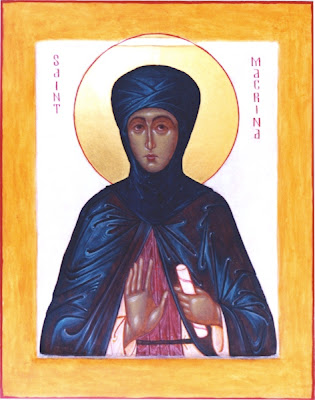 While Basil is known as the author of the early rule for Eastern monks (which the Western founder and Benedict knew) he was --remember this-- the younger brother of Macrina, who established and lived a rule first with her community of women.

Paul Halsall of Fordham University, who has for at least a decade made available all kinds of historical resources, has put Gregory's Life of Macrina online along with an introduction and bibliography. You can find this resource here.

Because she was a woman of the Christian East (Cappadocia is in present-day Turkey), Macrina can be a bridge between East and West in our contemporary conversations.

Interestingly, one of the newest congregations (a project, not a parish) of the Episcopal Diocese of California, a child of the creative St. Gregory of Nyssa Church in San Francisco, is named for Macrina. Naturally, they have a website. It's the first I've heard of a Western Christian congregation named for Macrina. (There are, of course, Eastern Christian ones named for her, including one in a small jurisdiction, the Orthodox Catholic Church in America, an Orthodox but not always "orthodox" community.)

I also named a cat after Macrina last winter. Alas, I turned out to be allergic to her (this was last winter) and had to return her to her friendly foster humans after a few days, and she took back her old name. But perhaps she was Macrina the Elder, and a non-allergifying Macrina the Younger will come someday to stay and will, true to her namesake, run the household and make sure that there is contemplative time and that the hungry are fed.

Foodie postscript: Macrina also has a bakery named after her in the Seattle area. And a Russian Orthodox (ROCOR) women's group in Virginia which is sponsoring a cookbook.
Posted by Jane R at 11:11 PM

It has been such a treat to be introduced to the Saints of July, including those not yet listed in the BCP, by you, Padre Mickey & Padre Rob, and Mimi, including my dear St. Maggie.

If she gets bumped to my actual birthday because it's Sunday this Sunday, (the 22nd to the 23rd), does that mean I really get to count her as mine?

That wasn't very subtle, was it?

No, but there's no need for subtlety here. :-) I love her too, and I wish she had a major feast. And will feel a little odd on Sunday (the 22d, her usual day) when we have Martha and Mary. But that gives us extra women, and I will be preaching about them. I'll post a Mary Mag sermon for you on Monday, I have one in my files, from a special Mary of Magdala celebration we had a few years ago at the seminary in Berkeley. Happy pre-birthday. Remember when we are over 40 we can do birth-month instead of birthday.

That's a treat I am looking forward to.

It feels a little odd to mention it; no one has made much of it since I was a child, including me.