... chefs des rotisseurs, among others. Those are the head grillers in a large kitchen. (I will refrain from starting the barbecue discussion. Take it to another blog.)

His incredible strength and courage when being grilled to death led to his patronage of cooks, says one among many hagiographers. It was in the midst of this torture on an outdoor iron stove that Laurentius, they say, cried out: "I am already roasted on one side and, if thou wouldst have me well cooked, it is time to turn me on the other."

His martyrdom is one of the best documented in the early church.

More importantly for our contemporary sensibilities, On 10 August Lawrence was commanded to appear for his execution, and to bring along the treasure with which he had been entrusted. When he arrived, the archdeacon was accompanied by a multitude of Rome's crippled, blind, sick, and indigent; he announced that these were the true treasure of the Church. (Same anonymous hagiographer -- on a cooking site, no less.)

Lawrence's care for the poor, the ill, the neglected have led to his patronage of them. His work to save the material wealth of the Church, including its documents, brought librarians and those in related fields to see him as a patron and to ask for his intercession.

It is a good day to honor deacons, whose ministry, like that of the deacon Laurentius, focuses on service to the poor and disenfranchised.

Let's call him by his Italian name, Lorenzo. Several churches in Rome mark the places where he lived and died. 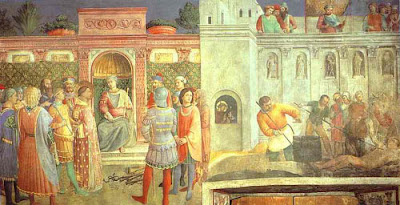 The annual Perseid meteor shower, one of the best known of the annually occurring meteor showers, and which occurs near his feast day in August, is sometimes called "The Tears of St. Lawrence" in Italy. Some refer to it as "the fiery tears of Lawrence."
Posted by Jane R at 10:20 AM

Ah, Jane, you had the courage to use one of the grilling pictures of Laurence, although surely not one of the more gruesome ones. I went with an icon.

Thank you, Mimi. I liked the Tears of St. Lawrence too. One of my best friends had just sent me an article on the meteor shower last night, but she didn't know about the St. Lawrence connection.

Good for you for posting an icon. Is L. carrying a thurible because he is a deacon or because it has fire in it? I like that icon.

As you noted, I didn't have the guts to post the most gruesome photo, which was the one to which I only posted a link (where the word "torture" is toward the top of the post). I figured Fra Angelico was always palatable even with torture. Still, if you look at the detail, it's not exactly cheery. The scene on the left is Lawrence still wearing his clothes and appearing before the emperor, I think.

Jane, Fra Angelico is always palatable to me. I love his paintings. His monastery in Florence, the Convento de San Marco, is an absolute delight to visit. Each monk's cell has a small fresco painted on the wall to aid meditation and prayer. With the madonnas and the angels, being there felt like a little taste of heaven.

I have no information on the origin of the icon that I posted. I assumed that he carried the thurible because he was a deacon, but there could be something to the fire idea.

Mimi, I remembered that we share an appreciation for Fra Angelico. To be honest, I have discovered many paintings of his since getting into this online saints' observance mode with you all. I wasn't acquainted with his less famous paintings before. (Though I did catch the special exhibit at the Met in NYC two years ago.)

And I didn't know about the convent! Sounds glorious. I've only been to Florence once.