Flying off; let's hope it's a hoot 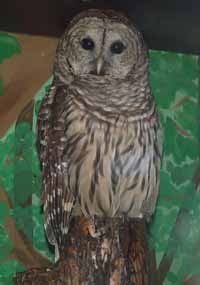 Double entendre on the "hoot."

I am off to the Big Family Reunion.

The name of the children's summer camp my maternal grandparents founded means "little white owl" in one of the local Native languages.

So some of my family members have a thing about owls. I have an aunt who collects them. Not the feathered ones, but little statues of them.

I just looked on the Web to see what manner of white owls actually live in Northern New England (where the camp was -- it was in our family for 50 years) and there aren't a lot. There are more brown owls than white ones. (I certainly never saw a white owl up there in the Vermont woods.) That's a Barred Owl up on the left. Pretty, isn't it? 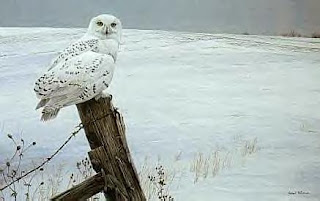 White ones (Snowy Owls and such) tend to live in the Arctic. Like the one on the right.

Then there's the Barn Owl (below, right) which isn't all white but which has a heart-shaped, funny-looking (to us) white face; there are definitely barn owls all over New England.

So who knows whether the name was based on a real owl sighting. The camp t-shirt had an owl on it, but it was a tufted-head one, not a round one. 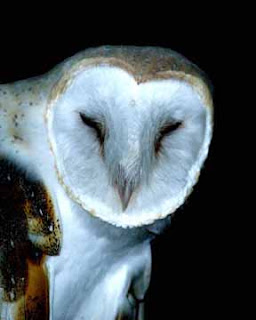 I always liked owls in school in any case because the owl was Athena's bird and she was the smart intellectual Greek goddess of wisdom. (Yes, I know, war too. But as a bookish child, I liked the wisdom and smarts part.)

And none of us in the family really looks like a white owl. Most of us are dark-haired and dark-eyed and rather Sephardic looking, though there are a few sets of green eyes here and there. My brother has blue eyes, but that's from my father's side of the family. 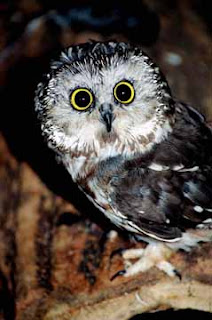 In any event, I am off for fun and games at the retirement community. Many cousins and some of their offspring and a few of the older generation who are still alive will be there. Everyone is converging on my parents' retirement community. (My mother is now the matriarch of her family, and she is the one who summoned the multitudes.)

Have a wonderful trip, Jane.

And I like owls, real and Potter kind, and Athena, despite her war mongering.

I never realized she kept an owl, I learn something new every day.

Your picture of the barred owl reminds me of the time I was returning from my walk just after dusk, and a barred owl in the vicinity nearly collided with me. I believe I frightened him/her almost as much as the owl frightened me.

The bird was flying to a low crepe myrtle near my back door, and his night vision must not have been functioning yet.

I saw a white owl when we were in Montreal last fall. It was beautiful.

White owls make me think of Harry Potter, which is natural, since I'm re-reading all the books and am starting #5 this afternoon.

Beautiful pictures. That's amazing that your grandparents started this camp! Have fun.

Okay Jane -- you have to share the camp name... I ask as one who attended places in New England that called themselves "Hanoum" and "Aloha." Latter still does actually.

Thanks for the owl pictures, especially the barn owl. We had barn owls in a hollow oak that was in the middle of the driveway between our house and the neighbors. They woke up at dusk every day and patrolled the fields behind us. When they came to life to begin the evening hunt we always knew because of a loud ticking or clicking sound. We called it the "Owl Alarm Clock." They were magnificent birds.

Dear Jan(inSanFran) -- It was Camp Kokosing (later renamed Camp Thoreau after our family sold it and just last year sold again and in a new incarnation). Founded 1927, became interracial, then coed (was boys only initially) in the 1940s. One of the first interracial private camps in the country. Aloha, of course, is in Fairlee just a few miles away! And many years after my camp days I met a whole family whose girls had gone there.

Thanks Mimi and Eileen and all for your good wishes. I am just back (it's Monday night) and will blog a bit tomorrow. Happy Feast of the Transfiguration. Jan, did you go to the demonstration at Livermore? (Two Jans here now. Jan in Texas, I'm referring to an annual Hiroshima Day event in the San Francisco Bay area.)