A French sort of week(end): Saint Louis a.k.a. Louis IX

Today is the feast of Louis IX. He is never known as Louis IX in France; you always learn about him and talk about him as "Saint Louis," though everyone knows he is Louis IX because in elementary school you learn all your kings and queens and who was the son of whom and the wife of whom and (very important) the mother of whom and (as I noted yesterday) the mistress of whom.

In this case the mother was important, because Saint Louis (pronounced the French way, not the Missouri way) was only 12 when he became king, so like several other kings of France, he had a regent, that is, someone who did most of the governing in his stead, and in his case it was Blanche of Castille, whose name we learned at the same time as her saintly son's. We never did, now that I think of it, learn who his wife was. My memories of Saint Louis are: Blanche of Castille, the Sainte-Chapelle (Louis had it built to house a piece of the true cross and the crown of thorns), Crusades, the building of a famous hospital for the poor and blind, and death from typhoid in 1270 -- and also the fact that he wasn't entirely what one might think of as a saint. Then again, neither were a lot of other saints. But he did sound rather military and most of the other saints did not. 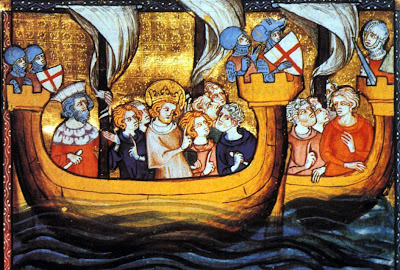 So let's go to the Daily Office bio for a little catch-up. There are errors in there in the French spelling, and I know I am being picky, but Americans who bungle French spelling, on restaurant menus or in historical biographies, or even when trying to be funny, get me irritated. (Ask PeaceBang, with whom I got all huffy (under my Beauty Tips for Ministers pseudonym), and yes of course PB and I are still friends.) I'm a grammar and spelling nut in English too, but there is something about the U.S. messing up of French that drives me particularly crazy. Psychoanalyze that -- I'm not going to bother. At any rate, the bio by James Kiefer is quite interesting as usual, but I have to note the proper spelling of the French cities of Limoges (which has an s at the end) and Périgueux (not Périgeux, which changes the pronunciation) and the province of Roussillon (two ss), from which there are some fine hearty red wines, as Dennis the wine maven will know.

The bio notes what I only vaguely remembered: that Louis was just and wise and had a mix of military valor and personal holiness. My students are always fascinated by the Crusades and by the new military orders (as in religious orders) that arose at the time: how did Christianity come to endorse violence and honor conquest? How did religious orders, which back in the days of Benedict, had almost exclusively been a sanctuary from fighting, expand to include warriors? What fervor for the holy places where Jesus walked drove the Crusaders? How to study the mix of faith, material greed, opportunism, and self-sacrifice present in the Crusades? What were relations with Muslims and Jews like and why? Why and how the killing? Were there friendly encounters as well? Louis's life contains, if not answers, at least illustrations for some of these questions. As a king, he did a great deal of good. I love Kiefer's accounts of Louis' friendships with Robert de Sorbon (yes, the Sorbonne was named after him) and Thomas Aquinas. His was a period of great intellectual and artistic ferment and creativity. One of the answers.com biographies notes that Louis ordered the expulsion of the Jews from France and had many copies of the Talmud burned: he was, alas but inevitably, a man of his time. (Note: the king who ordered the more strict and pervasive expulsion of the Jews was Louis' grandson, Philippe. See this account by the BBC researchers, a little more reliable than answers.com and well worth the read.)

Louis' life reminds us of the strength and subtlety required of those who rule, of the place of self-sacrifice in the exercise of power, of the complexities of every age especially when there is war and social chaos (which he managed not only to contain but to reduce), of the exercise of government with compassion, of the blind spots of all great people, and of an era with whose legacies we still live, in Europe, the Middle East, North Africa, and beyond: yes, here in the Americas too.
Posted by Jane R at 5:56 PM

When I spent a month in Paris (December 1967), I lived on the Île-St-Louis in the Hotel Olinda on the Rue St-Louis-en-l'Île, probably the most minimal habitation in that posh neighborhood. The shopkeepers up and down the street were wonderful, not like the Parisians of that era at all. I felt incredibly embraced by them.

La Sainte Chapelle is rather impressive.

Jane, you do not spend nearly enough time at the opera, where the French language is regularly assassinated by non-native speakers. I would rather have Massenet with an Italian or American accent than not have Massenet at all. A lot of singers who can negotiate Italian and German crash into a wall when it comes to French, probably (I am guessing) because it requires the singer to do things with the lips, tongue, and throat that have nothing to do with how they learned to sing or pronounce other languages.

For that matter, English is a lost language as well. And that is for American speakers. But let's not go there.

I don't mean assassinating the pronunciation -- that one people can't help. I mean mistakes in spelling and grammar on restaurant menus and in written accounts by people who ought to know better. And shops with fake French names that want to be classy but are just massacres of words that didn't ask to be mangled. But I am being a snob. Hey, it's what I get underpaid for...

Cat photos are coming, by the way (this in answer to your note on another post) but I have to wait till payday now unless the problematic ones from yesterday turn out. I don't have a digital camera so it's a production getting photos to post. Besides which, cats don't always like to pose, though this one did earlier today and very nicely. Miss Maya Pavlova has a sheyne punim, for sure.

Paul, you lucky duck, living on the Île Saint-Louis. Did you eat lots of Berthillon ice cream?

Vis-à-vis the opera & French & English, I once attended a performance of Dialogues des Carmelites at the Met which was sung in English. The cast was all American, except for the great French diva Régine Crespin. Crespin's words were the only ones I could understand...

Jane, I will never, ever forget my first visit to La Sainte Chapelle. I literally gasped when I saw the windows. They took my breath away.

I remember visiting the Cathedral in New Orleans. (Before a memorable dinner, of course.)

Are some of the other "King Louis" in New Orleans and parts of Louisiana after the Louis who was king (the 14th or 15th or 16th) when Louisiana was French? Which Louis is Louisiana named for? I forget. It's one of those three 18th century guys, I think. (I should review my history!)

In the suburbs of New Orleans, there is a parish church called St. Louis, King of France. I'm thinking now, as I write, that perhaps the royal title is used to avoid confusion with the cathedral.

Louisiana was named after Louis XIV.

That was my first guess since he was the one with the long reign and the big ego, and it is coming back to me (I had to teach something about the 2d century today so I am a bit "de-phased" as the French would say) -- thanks for the reminder.

I am glad I got to visit New Orleans when I did. It was several years back. (The Catholic Theological Society of America was meeting there that year. We had a great tour of some of the major African American Catholic sites. And we ate. And at the banquet on the last night of the conference Dr. Michael White and his group came and played; I still have the two CDs I bought from him that night, signed. And I heard him speak on the radio recently!) How was the conference this weekend? I have to catch up on reading your blog... Hope you are feeling better.