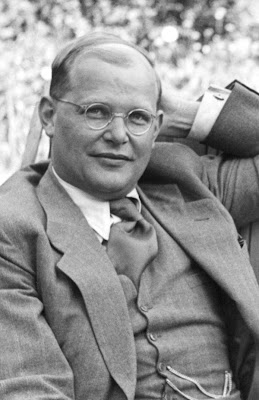 Today is the anniversary of the death of Dietrich Bonhoeffer. I'll try to find time later to write a bit about him or at least to post some good quotes. Those of you who know me know how important Bonhoeffer is to me and that I teach his work. It's another busy day in academe and I don't want to burn the 2 a.m. oil again, so for now, see this post in the Sojourners/Wallis neighborhood of the blogosphere.

Now that I think of it, I can probably pull some things from last semester's "Radical Theologians of Europe and North America" course website (closed to the public, which is why I can't link you directly) and upload them here. Stay tuned.

The Episcopal Church calendar lists B's feast day as April 10, at least in this year's edition, but the anniversary is in fact today, April 9.

Here's a good Episcopal link about Bonhoeffer. More coming, though. (And we really should read something from our Lutheran sisters and brothers!) The essay on that link says that some of B's statements in Letters and Papers from Prison "baffle the reader." It depends which reader! Those are probably the statements that spoke most deeply to some of my students -- and to Dorothee Sölle, and to me.

Greetings in Christ!
Good to see someone else interested in Bonhoeffer today. I do a devotional hagiography (saint biography, they get nifty names) for folks in the Lutheran (LCMS and sometimes ELCA) list of commemorations.

It would be cool if you did the same for the Anglican calendar.

Blessings on your growing blog!

The Daily Office people at Mission Saint Clare (to whose comment I linked) do a calendar already -- and I don't feel called to do so on this eclectic blog, which I do ad hoc on top of a full-time college teaching job and various ministerial and churchy responsibilities and writing a Big Fat Academic Tome these days... But I do and will, as the Spirit moves, observe many holy days including saints' commemorations here, visually or verbally -- and you'll be happy to know that I also teach the history of Christianity course at Guilford (my other courses are more in the contemporary theology area, though I also do some historical things in my African American Religion and Theology course) and that my students learn the word "hagiography" and get to look at some wonderful icons and other Christian art and architecture from East and West.

But thank you for the fine suggestion, and peace and all good to you as you complete your seminary studies and begin your pastorate. Stop by again. I've bookmarked your blog and will check in once in a while. Joyous Eastertide to you.

Thanks Jane!
I'll check out the Daily Office a little more (I used it for a little while in my personal devos but slagged off when I found something else).

Hah...is "Big Fat Academic Tome" going to be the name of what you publish? What's it about?

May blessings shower upon you.

Your post reminds me of a fierce argument in a class Luise Schottroff gave on Eucharist as Sacred Eating. It was another April 9th, and Luise explained to the class how important Bonhoeffer's martyrdom is to her, as a German feminist theologian who grew up during through the Holocaust. Suddenly, unexpectedly, one of my fellow students was furious. Boenhoffer, he said, could not possibly have been a Christian martyr, because he had joined the plot to kill Hitler, had embraced violence.

Perhaps. Or another way of looking at it is that Boenhoffer was willing to sacrifice something greater even than his life; he believed he was offering his soul.

A good thought, Rebecca. And how very knee-jerk PSR for the student to get upset about B's joining the plot to kill Hitler -- did s/he know nothing about the context? about the realities of Nazism? about the careful and prayerful struggle Bonhoeffer underwent during his time in the resistance?

Interesting none of my students here had this reaction (I taught Bonhoeffer last semester in my "Radical Theologians of Europe and North America" course) although many are committed personally to nonviolence. But some, like the PSR student (or whichever of the GTU schools this person was from) have trouble looking at a person's life in context or removing their filters even for the sake of study. I have one student (in a different class) who was like that with the Rule of St. Benedict. Just couldn't make the jump to the 6th century (despite many explanations about context and background and purpose and the fact that all the others in the class discussion "got it.")

But I ramble and I must get ready for class. Having fun with this new course I designed called "Health, Spirituality, and Justice" (which I have been meaning to write about here on the blog) -- we're studying a variety of spiritual practices and also examining various public health issues, most recently reading our way through Paul Farmer's Pathologies of Power, which you would like very much if you haven't seen it already. (Jan too.)

Abrazos to you, and thanks so much for stopping by. Hoping to get to the Bay Area June-ish. Will let you know.