DO SOMETHING for health care reform every day: a series begins

Occasionally we have a series here at Acts of Hope, a mix of information, inspiration, and advocacy. We seem to do this roughly once a year, though not by design.

There was the fund-raising and Latin American theologies series. The beneficiary of our (and other blogs' - this was a group project) fund-raising was an Anglican parish in a very poor neighborhood of Rio de Janeiro. By the way, I have an update on the parish of Cristo Rei from our friend Luiz which I have been meaning to post and which will go up this weekend.

Then there was the Obama election series. 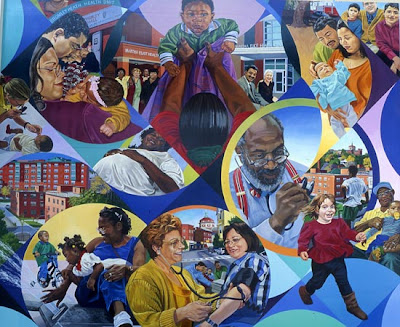 Some of you may have been involved, the last 48 hours, in the Facebook series that asked you to post to your daily updates the following message: No one should die because they cannot afford health care, and no one should go broke because they get sick. If you agree, please post this as your status for the rest of the day.

Not because I don't agree --I do and then some-- but because I felt that for the most part it would be preaching to the converted and that if my eyes were starting to glaze over from the message, other people's would. And mostly, because I think we need to DO something.

Like my other friends and colleague who want health care reform and who prefer either a public option or plain ol' single payer health care, I rant and complain, but more than half the time, I don't do anything. Meanwhile, there are lies and distortions all over the place, our local and national media don't get complaint letters when they spread those lies or when they fail to do their job as public educators, the noisy rude folk dominate the public forums (or maybe they don't, but they sure get the coverage), and our Congressfolk don't hear from us. A few of them have spines, but the others will not develop them till we remind them that we are the ones who will re-elect them -- or not. And that they work for us.

And we bitch and moan (pardon my language) about the President we worked hard to elect when he doesn't change massive systems with the wave of a magic wand. Then, of course, we will blame him for everything.

How do you think we got him elected?

It's our country, these are our bodies, this is our health care system we want to change. And we have no right to complain unless we act.

Thus, I am starting a series here. It's partly to get myself off my duff and have a place to be accountable and partly because besides I am at heart several things --artist, priest, and yes, organizer.

I don't have time for this either, but it's too important to leave alone.

I don't fully know what will be in this series, but I pledge to put something useful here every day. Information, education, ways to act, analysis, commentary, reporting. It won't all be mine. There is no need to reinvent the wheel. I will link to other sources and to people who know more than I.

And yes, I will write, this weekend, a short report on our Greensboro public forum on health care, with a little something on Teddy Kennedy.

I am also doing this in part in memory of Kennedy, who was my Senator for many years and was still, at the time of his death, my parents' Senator.

Feel free to send me (in the comments or via e-mail) information and links and suggestions.

Stay tuned. And thank you for reading this and for caring for the common good.

If you haven't see this video about the why of government-run health insurance, have a look.

P.S. I'll still post other things, too. This isn't turning into The Health Care Blog.

Thanks so much, Jane! I'll be following your blog.

EXCELLENT!
And, in the midst of all this, let's not forget that the Ryan White CARE Act is due to expire at the end of September and so far no re-authorization in sight. Not that Congress hasn't dragged it's foot on this before. But, still... The number for the Capitol Switchboard is 001 202 224 3121. Anyone can contact me off list if you want talking points or anything. It's important.

You're a good egg, Jane. Thanks for taking this on.

Thanks, Jane, for doing this. Ronni Bennett at Time Goes By is also posting on health care issues, with useful links. Here's her latest:

I copied the "No one should die" message and posted it on FB. It was interesting to watch it spread among my "communities" - alumnae, church, choir, etc. which are usually unrelated. I'm sure it went beyond my associations as I know there are people I haven't friended who are friends of friends who posted it. One alumna even got a nasty comment from some gentleman who doesn't seem to have much compassion for anything except himself and his money.

I've been trying to blog about it but can't seem to organize my agitation with everyone involved into anything worth publishing or reading.