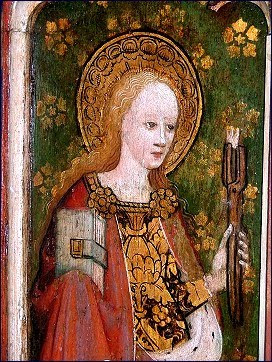 I had oral surgery a few days ago and have been meaning to write this post since last week, but life has been busy, first with a little road trip out of state to a family Bar Mitzvah (photos on Facebook for those of you who are FB people) and then a wedding of two young Guilford alumns (ditto, smaller album), then getting ready for the surgery, and finally the surgery and recovery. I am doing fine, healing slowly and being creative with liquid and soft foods, but the point of this post is the saint for tooth trouble and dentists, Apollonia.

Apollonia was a Christian woman from Alexandria, Egypt, in the 3d century of the Common Era. Part of her martyrdom involved getting her teeth smashed and/or pulled out; hence she is often represented in Christian iconography with pincers and a big tooth.

Apollonia's torturers threatened her with death by fire if she did not renounce the faith. In her zeal for the faith she threw herself on the pyre before they could take her there.

One of my old friends says she bets that it had nothing to do with zeal for the faith and much more to do with the fact that the tooth pain was so horrid that anything was better than enduring it any more! She's got a point... The fact remains, though, that Apollonia had already lived a long life of holiness and service and that she was a woman of deep devotion and determination.

The image above is from an English church. You can find it on an interesting website on Norfolk churches.

Both Orthodox and Catholic Christians observe Apollonia's feast day (February 9). I think we Anglicans should join them. After all, she is an ancient Alexandrian martyr.

Note: Alexandria was a virgin but probably also a deacon. parthénos presbûtis, the phrase used to describe her in the martyrologies, does not necessarily mean "an older virgin" but more likely, according to the scholars, an ordained deacon/ess. There is plenty of scholarship on women deacons, not just as deaconesses as an unordained order, but as ordained deacons.

Did you know there has even been an international Orthodox conference on women in the diaconate whose proceedings, published in 1998, have been endorsed by His All Holiness Patriarch Bartholomew, the Ecumenical Patriarch?

Here's a rather dreadful 15th century painting of Apollonia's torture. I mean the torture is dreadful, not the painting.

And then there's this (Heilsbronn Cathedral, Bavaria, 16th century): 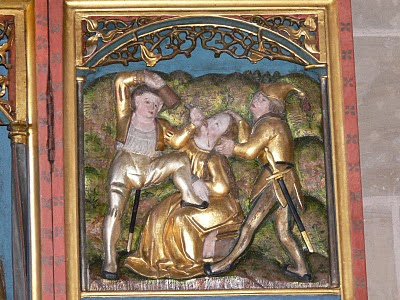 This is likely a modern facsimile of medieval iconography. It is the illustration on a dental office called "Apollonia House" in the U.K.

This is probably the best known representation, a painting by Francisco de Zurbarán (early 17th century). 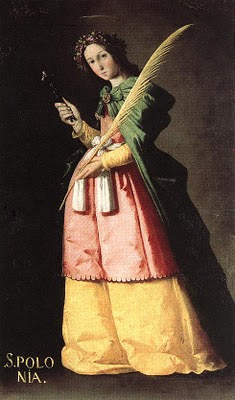 I am rather more fond of the English one at the top of this post.

There are images of Apollonia all over Europe.

There are also reputed pieces of her in several countries including Italy, Belgium, Germany, and Portugal.

Oh Jane, I'm laughing so hard, but being very careful of my teeth as I do so! I can relate! What a great story and good pictures about Apollonia. These are the bits and pieces of church history that I love.