Good Friday: A Meditation on the Eleventh Station of the Cross

I am always moved and inspired by the Stations of the Cross at St. Mary's House. (Yes, Episcopalians have Stations of the Cross, though not everywhere.) A different person offers a meditation for each of the 14 stations, many spoken, some sung, one or two visual. So much wisdom, talent, heart, and faith for one small congregation.

Here is my meditation on the eleventh station, "Jesus Is Nailed to the Cross." 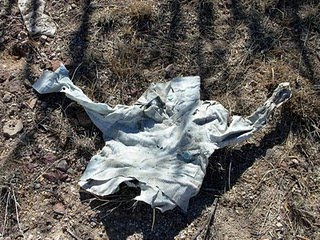 Jesus Is Nailed to the Cross

Will you be there?

These stories come from the witness of Kelsey McNicholas,
a student at Guilford College and a volunteer
with the humanitarian organization No More Deaths
which seeks out migrants in the desert
to give them water, food, medical care,
and presence.

When undocumented immigrants are caught
by the U.S. border patrol,
they are
detained.
Manuel González told Kelsey
that while in detention
on the U.S. side of the border,
our side,
he'd only been given peanut butter to eat.

Ricardo Emilio Sánchez,
walking beside Manuel and Kelsey,
chimed in
that he had been given a tiny cold hamburger
and a small juice
for the whole day.

During Kelsey’s time in Nogales, Mexico,
across the border from Tucson, Arizona,
other people who had recently been detained
on the other side,
our side,
and then deported back to the Mexican side,
told her
that they weren't allowed to sleep.
Guards would come in and blare music
to keep them from sleeping.

Women described being stripped
to their last layer of clothing
in a highly air conditioned room.

Men described
having seventy people crammed into one room,
so packed that three had to sleep in the bathroom,
preventing anyone from using the facilities for three days.

During the dangerous crossing
from Mexico to the U.S.
and on occasion
in the other direction,
women, children, and men
driven by economic necessity,
risk their lives
there, in the heat and the rocks.

The bodies of those who died in the desert,
if they are not found soon enough,
disappear.
The desert heat and dryness
eat them away
and they are gone.
Flesh, bones.
Clothes.

Sometimes
after they die
or
if they are lucky,
after they are caught, arrested, and detained,
in the desert
a child’s shoe remains,
or a backpack,
or a small shrine to La Virgen de Guadalupe
in a hole in a rock.

The volunteers find them:
the shoe,
the backpack,
the shrine.

Sometimes, too, the border patrol discovers
these traces of human lives,
of faith,
fear,
the drive to survive.

Far away
from the hot desert
in which the migrants
walk in the
in-between place
between there and here
we are busy
making laws.

Far away
from the hot desert of Arizona,
in the deserts of Australia
and Sudan
the droughts worsen.

In Alaska,
the caribou have changed their migration patterns
because the ice melts too soon.

In Japan,
some survivors of Hiroshima are still alive
while neighbors of Fukushima power plant wonder
whether they will become ill
next week
next month
or next year.

In Harlem and San Francisco.
Black and brown children,
God’s youngest
children,
are disproportionately represented
among children with asthma
wheezing and coughing in emergency rooms
with anxious parents at their side.

In fields and factories
on this continent north and south
workers labor amid chemicals
not fit for human consumption
so that we can have
our strawberries
and our t-shirts.

We have nailed the earth God made
to a cross of
heat and waste.

By the cross of Jesus the Christ
the soldiers of the Empire
mock
and taunt
and violate
the precious body
of God.

And behind them,
at the place of shame and death,
in the open torture chamber in the hot sun
only a few, few friends remain,
witnessing.

Mary of Magdala.
Mary the mother of Jesus.
One or two other women.
The beloved disciple,
whose name
we may or may not know.

Only their presence protests.

But they are present.

It is dangerous in the Roman Empire
even to stay and watch
the crucified.
Even more dangerous
to take the body down
and bury it with care
rather than letting birds, animals,
the hot sun,
destroy it
and its remains.

If we do not cry out
The stones will cry out.

But must we leave it to the stones?

Jane - thank you for posting this. I've missed your postings this past year & your perspective on faith, but I know you've been busy writing. I hope you find new strength & hope this Easter!

Gordon, thank you! Actually, I've been busy being exhausted by my demanding job and having writer's block! (Or maybe just energy drain.) I preached on Maundy Thursday and need to fiddle with my sermon notes and post the sermon (I improvised bits of it). Will try to do so soon so the improvised bits don't escape me (which is what has happened with several sermons this year).

I also have a piece coming out soon in the Episcopal Café, co-written with my friend and colleague Deirdre Good. I'll post a note here when it is up at the Café. http://www.episcopalcafe.com/

Thank you for your kind and good wishes. It's good to know I have readers. Blessings to you this Easter!

I am delighted that religion in general, and Mainline Protestantism in particular, is shrinking away to nothing. The idea that this mincing around in chasubles in a church over 95% White and Middle class pretending to do something for the poor is absolutely stupid.
Get a life.