Greetings, friends.
The blog has been dormant for two and a half months for a variety of reasons: some travel, the start of the academic year in a continually demanding job, a lot of Facebook activity (I am going to start cross-posting, I think), a bit of illness (nothing life-threatening), and other demands and choices. I'll be back soon though with regular posts. Just wanted to leave a note to let readers know that the blog is still alive. 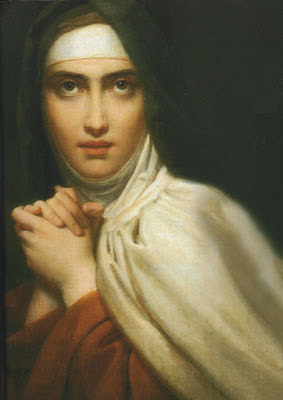 Today, October 15, Catholic, Anglican, and some other Christians in the West celebrate the feast of Teresa of Ávila, 16th century Spanish Catholic woman of Jewish descent (her paternal grandfather was forced to convert to Christianity), reformer of the Carmelite religious order, mystic, and theologian. The Roman Catholic Church also honors Teresa as one of only three women "Doctors of the Church." Her prayer-poem "Nada te turbe" ("Let nothing disturb you") has become well-known and exists in a beautiful chanted version from the Taizé community.  Enjoy the chant by clicking here.
The original poem is longer, but the words used in the Taizé chant are these:
Nada te turbe, nada te espante
Quien a Dios tiene, nada le falta
Nada te turbe, nada te espante
Solo Dios basta


Also, #OccupyGreensboro, one of the many gatherings related to #OccupyWallStreet, begins this afternoon. (I currently live in Greensboro, North Carolina.) Local newspaper story here. (I think the man quoted at the end is overly optimistic: we are in another Gilded Age already.) For the human stories at the base of the movement around the U.S., see here.  In fact, read them first.  Stay tuned.  Peace to all.

Hi!
I guess you mean that Teresa is one of the three women doctors of the church.

Oops! Yes, sorry - you can see I am distracted. Will correct right away. Thank you for catching that.

Beautiful image of Teresa... God bless you dear Jane and peace and prayers for you, nada te turbe.

Hey, you're missing all the cool Matisyahu stuff I'm posting on FB. No to worry, though. You and +Maya will muddle through without, I am sure.