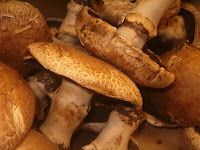 No time to write, but time to procrastinate... Someone write a tune for that one, please.

A short break to visit the local supermarket to replenish the supply of kitty litter -- and there on the discounted vegetable cart were several extra cheap and perfectly acceptable bags of portobello (or portabella) mushrooms. I bought two bags, for a grand total of not quite four dollars, and let me tell you, that's a lot of big fat portobello (or portabella) mushrooms. They don't look pretty, but they're fine otherwise.

Let's have a recipe contest. I tend not to cook with recipes, even though I have posted some here and do follow directions when I bake or when I make Thai peanut sauce. Otherwise, it's improv all the way since I know what tastes go with what and I like to use seasonal and local foods. Heaven knows where these mushrooms came from but they were too cheap and interesting to resist. (Another tune, please for the words "too cheap and interesting to resist," which can surely be used in many contexts.)

Ideas, anyone? Post 'em in the Comments section. JohnieB? TCR? Dennis? Ormonde? Clumber? Paul the BB? (Have you noticed the trend of Guys Who Cook among this crowd?)

You may not suggest cream (heavy or whipping or half and half) (oh, Lord, another tune needed here) because I do not have any in the house and am not going out again. Plus, I rarely keep cream around.

What I do have in the house right now: a little garlic (not as much as usual, but enough to use in a recipe), onions, carrots, a little leftover steamed kale, flour, oil (olive, canola, toasted sesame), a couple of eggs, brown rice, pasta, lentils, rolled oats, somewhat stale whole grain bread, a little butter. No cheese left in the house except a little blue cheese. Fresh ginger. Avocados. (Expensive purchase that cancelled out the cheap mushroom purchase, but hey, it's payday and I am craving avocado.) Milk, wine (red) (but I'm not drinking any this weekend, I have to write, though in a sauce is fine), vodka, maple syrup. Bottled organic lemon juice and lime juice (that's two different bottles). Cashew nuts, walnuts, almonds (in freezer, ready to use). Yogurt (organic plain nonfat). And almost every herb or spice you can think of. Also fresh parsley. I think that's it but OCICBW, I am scanning the fridge and the shelves from memory here in the back of the house.
******************** 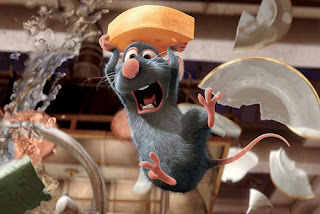 How long I like to take to fix a meal (not counting washing the vegetables): 15 or 20 minutes tops. That's these days. I'll gladly cook for an hour when I'm not having One of Those Weeks, but there is an accumulation of Those Weeks this winter. Which doesn't mean I should eat badly especially on weekends. (The nutritional balance was fine this week, but I acquired it with some things that required little or no cooking.)

Saddle your horses. Off you go.

If no one suggests anything by suppertime (I eat late, European style, so there's time) I shall have to improvise. I may leave half the 'shrooms till tomorrow, though, so post away. There are enough for two recipes. After tomorrow, though, they'll go bad if they remain uncooked.

P.S. ALSO (found it later in the fridge): one Tofurkey Italian sausage. Never had such a thing in the house, but never say never; see the Comments section for the how and why of the never say never. It's not bad, actually. Portobello stuffed with a mixture of fake sausage, fresh onion, and fresh parsley? There's already sun-dried tomato, a bit of basil, and garlic in the Tofurkey thingie.
Posted by Jane R at 4:13 PM

I'm thinkin a pasta sauce of mushrooms, onions, carrots, lentils, cashews, and kale: in butter and oil (that means Olive, unless I qualify it) Garlic? I dunno; maybe not. I like thyme, but I'm not sure with the Kale (depends, in part, on which Kale), The herbs/ spices need to go with that root winter vegetable thing. Here's a brainstorm weird thought: curry. You got Toasted Sesame oil?

Overall, a earthy take from moi.

I gots all kinds of curry spices.

Dark kale. Lacinato or something. A touch of tarragon (I am not usually a tarragon fan, but this might work) would do better than thyme.

Meanwhile I found one more thing in the fridge (will put as a PS in the main post): a Tofurkey Italian sausage; I never eat Tofurkey anything but packages of these were on sale at the food co-op last weekend. Not bad! I just don't like sausage that much, tofu or animal. Three in a week already stretched my limits. (There were four in the package.)

Lentils will take too long to cook, non?

My instinct is just to do a very simple thing with carrots and onions and a touch of olive oil and garlic, maybe a dash of tarragon. But I am a cuisine maison kind of girl and keep things simple. As in, I'm just a simple country theologian. (Except when I do a precise recipe for Moroccan vegetarian stew which I must post sometime, if I didn't already last April/early May.)

Thanks! I'll think on this. Ended up having half a supper already (the raw salad-y avocado part) because I realized I had breakfast so late that I had totally skipped lunch. Had a handful of cashews for protein after that and I'm back at the desk and will have dinner at some Italian hour. Meanwhile I have time to ponder your suggestions and others.

But curry, as I said above, we have curry. Curry powder, ground cumin, turmeric, fresh ginger, hot chili pepper flakes and powder, saffron, cinnamon, coriander (pods and powder) and heaven knows what else.

Sorry; I wasn't clear. I wuz running on at least two tracks: curry and Sesame/Asian. The Sesame oil I use with lentils and onions: c'est tres bon.

Mine was Teriyaki Salmon, Haricots Verts, and a baguette, with a 2006 Les Genievres. The baguette was from Whole Foods, and it sucked (well, in comparison); so I am without bread for two weeks in a row. Kathy's partner has been ill for some weeks, and is now in hospital; his name is Brian, and he's a very sweet guy. He works at my greengrocer's/ farm, and could use prayers/ good thoughts, all y'all who pass by here.

Prayers for your baker's partner. I will add them to my intentions. In addition to BCP and spontaneous prayers, I am praying the Healing Psalms of Nachman of Bratslav. More on them in a post this weekend if time allows.

I need to pray them more.

As for the food, hmmm. It turns out the avocado and julienned cabbage salad (I know, weird, but it works and green cabbage is cheaper than lettuce in the winter and full of vitamins) plus the handful of cashews and a couple of spoons of dark cherry jam (for a sweet treat - for some reason the usual organic dark chocolate is not appealing to me, which is a sign of temporary insanity, for sure) have filled me, so the mushroom will probably be for a Madrid-hour (or Rome-on-the-weekend hour) 10 p.m. ish dinner. I'm thinking simple today -- the abovementioned simple combo atop brown rice (which won't take any active time because I just plug in the rice cooker and voila, the busy absent-minded academic's salvation and no more burned pots). Then tomorrow I'll go to town with something more elaborate, probably involving the Tofurkey Italian sausage, Godde help me. But I may go for your cashew idea, which is intriguing.

I am writing a sermon on discernment. What does Scarlett O'Hara have to do with the story of the Prophet Samuel anointing the future King David? Tune in Sunday to find out.

Okay, so I am going with the simple version, but the herb idea came in conversation with you, JB. And it's all in the shape and size of the slices, for color and diversity: thin rounds of carrot, chopped onion, minced garlic, and long thick slices of the portabella (portobello), with olive oil (not too much, but enough) as the oil to sauté the carrots and onion and bind the mushrooms with them a bit before they start leaking water. And a sprinkle, but really a discreet one, of tarragon (too much dried tarragon is nauseating, not to mention overwhelming), and some salt. I'll finish it with a little freshly ground pepper. Serve on top of or next to brown rice and voilà, a fairly health-nutty dinner.

You can even have less of the rice and more of the 'shrooms if you are watching carbs.

Tomorrow: something more extravagant. Though I should be careful since it will be Saturday and I don't want to breathe fire or garlic on people on Sunday morning in church.

Oh, am I ever late to this party - those mushrooms are probably either turds or compost by now!

Well, if it's still relevant, these thoughts came to mind:

Mushroom-stuffed crèpes (though I didn't see "milk" on your list, so maybe that's a non-starter,) or

A Mushroom Risotto. The carrots (finely diced) and cashews would be great in it, as would the Lacinato kale. If it's still "al dente," I usually roll my kale up and slice it finely, essentially julienning it.

And in the future, rather than letting portabellas go south on you, consider slicing them into half-inch strips and drying them in a low-heat oven. I did this with a shopping-bag-full of boletes which I picked a few years back, and the results were so much more than satisfactory - the li'l buggers rehydrated into chewy, intensely flavored stir-fry fodder. Ate 'em for a year, we did!