The Massacre of the Holy Innocents in European Art

European artists of the late Middle Ages painted the Massacre of the Holy Innocents in the landscape and clothing of their location and era. Giotto's painting, below, is one of the two best known. 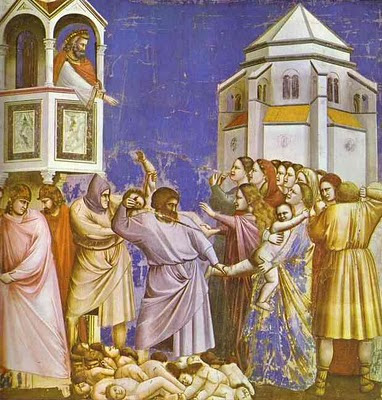 The other well-known one is by Pieter Brueghel the Elder. 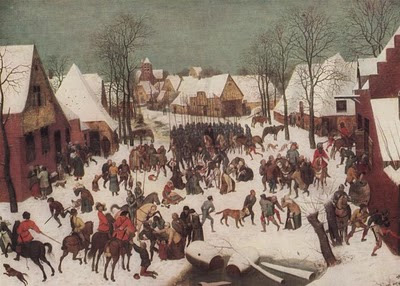 I just discovered a third which doesn't get as much exposure (at least to my knowledge) but is well worth a look. It is by Duccio di Buoninsegna. 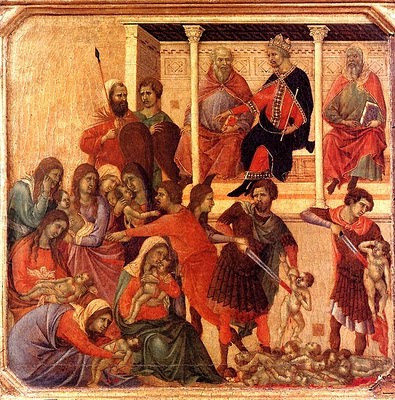 (The Innocents, all boys according to the biblical story, seem to have no genitals. Also, the mothers are as important as the babies in this picture.)

This one is part of a much larger multi-paneled work now known as the Maestà, a panel for the Siena cathedral's high altar. The term Maestà usually indicates a representation of Mary the Mother of Jesus, the Madonna, seated with the child and surrounded by angels, and there was in fact such a representation on the panel.

Written Dec. 28, posted Jan. 1 once the image insert function started working again. Click on the images to enlarge them and see more detail.
Posted by Jane R at 6:18 PM

Jane,
Thank you for the attention you are giving this. You are right in what you say in another post that loving a child will go a long way towards creating a healthy future for all children. And, just a little love goes further than even a lot of violence.

Hi,
I am an editor with Fluwikie.com. I really liked your website. While reviewing the website, I came across the page and was impressed with the Flu and Diseases related information. I am contacting you in hopes of having Resource Tab added as a resource to your site. We want to spread public awareness. I hope you can help me out. Your site is a very useful resource.

Please email me back with your URL in subject line to take a step ahead and to avoid spam.

I have been visiting various blogs for my term papers writing research. I have found your blog to be quite useful. Keep updating your blog with valuable information... Regards