Note: I am writing this post on the weekend of December 11-13 but back-dating it to the day of the anniversary, the day I thought of it.

Karl Barth, considered by many to be the greatest Protestant theologian of the 20th century, author of the The Epistle to the Romans and the Church Dogmatics and principal author of the Barmen Declaration, and Thomas Merton, writer, Catholic convert, Trappist monk, spiritual seeker and teacher, died on the same day in 1968, December 10, and today we remember them both.

I remember them especially through the lens of Merton's short essay (from his journal) at the beginning of Conjectures of a Guilty Bystander, one of two books that influenced and moved me during my conversion to Catholicism, which was also my time as an M.Div. student at Harvard Divinity School. The other book was Thoughts in Solitude. The Seven Storey Mountain never did much for me.

Here is the essay. 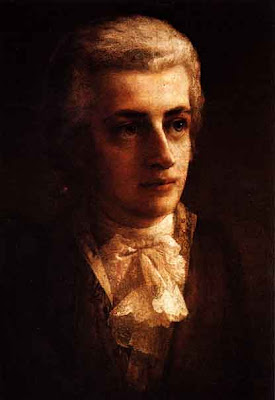 Karl Barth had a dream about Mozart.


Barth, in his dream, was appointed to examine Mozart in theology. He wanted to make the exam as favorable as possible, and in his questions he alluded pointedly to Mozart's masses.

But Mozart did not answer a word.

I was deeply moved by Barth's account of this dream and almost wanted to write him a letter about it. The dream concerns his salvation, and Barth perhaps is striving to admit that he will be saved more by the Mozart in himself than by his theology.

Each day, for years, Barth played Mozart every morning before going to work on his dogma.: unconsciously seeking to awaken, perhaps, the hidden sophianic Mozart in himself, the central wisdom that comes in tune with the divine and cosmic music and is saved by love, yes, even by eros. While the other, theological self, seemingly more concerned with love, grasps at a more stern, more cerebral agape: a love that, after all, is not in our own heart but only in God and revealed only to our head.

Barth says, also significantly, that "it is a child, even a 'divine' child, who speaks in Mozart's music to us." Some, he says, considered Mozart always a child in practical affairs (but Burckhardt "earnestly took exception" to this view). At the same time, Mozart, the child prodigy, "was never allowed to be a child in the literal meaning of that word." He gave his first concert at the age of six.

Yet he was always a child "in the higher meaning of that word."

Fear not, Karl Barth! Trust in the divine mercy. Though you have grown up to become a theologian, Christ remains a child in you. Your books (and mine) matter less than we might think! There is in us a Mozart who will be our salvation.

I love this - it makes me weepy and it makes my heart swell too.

I recall that some conductor--of course now the name is totally erased--is supposed to have said "Beethoven's music can rise to Heaven. But Mozart's starts there."