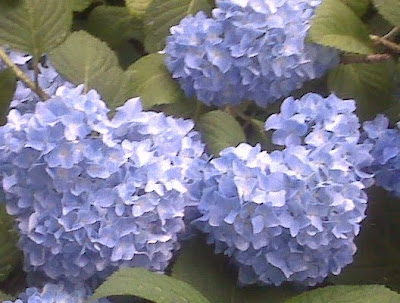 Good heavens.  I neglected to put up pictures of the hydrangeas when they got really blue.  Though there is one small bush of purple hydrangeas (the color of hydrangeas has to do with the acidity of the soil) the other small bush and the really huge one are both blue, and they went from pale blue (mixed with cream at the core of the flowers when they were just "ripening") to periwinkle.  I took most of the photos with the BlackBerry camera, which distorts the color a bit, so the periwinkle-ness is not obvious, but you can see that the blue is more intense than it was in the first week or too of hydrangea blooming.

The hydrangea is the only thing I've taken care of this year.  The garden is my landlady's doing and the flowers pop up in due season, one wave after the other.  The hydrangea bushes were full of dead wood --no one had trimmed or pulled it out in years-- so in the late winter or very early spring I got rid of it.  It took a long time and the wood filled about three garbage bins.  I had scratched arms after that, having been attacked by the hydrangeas as I worked.  I now understand why garden ladies garden in long sleeves. The reward was a huge, really huge hydrangea bush, much larger than last year, and even more flowers than last year. Spectacular.
Otherwise, all due credit to the house's owner, to Mother Nature, and to Godde, not necessarily in that order. 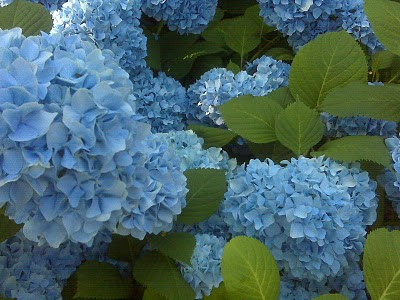 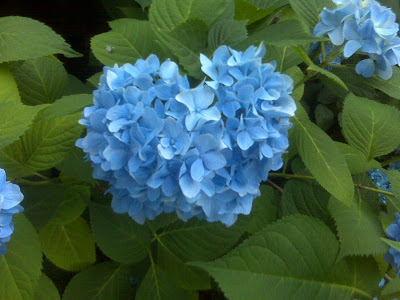 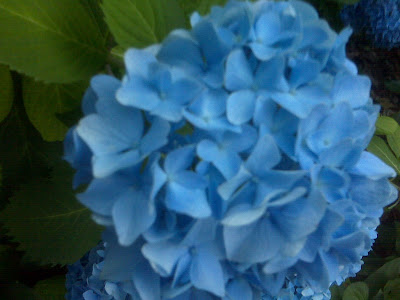 This is a little purple hydrangea flower after the rain. 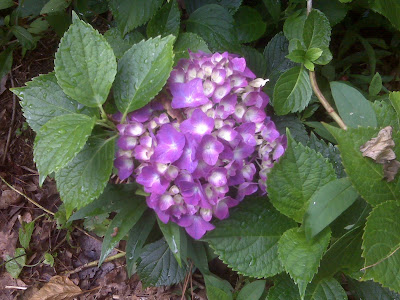 In the variegated bouquet below, the middle flower was in fact more blue-purple than the dark blue it appears to be and the right hand flower was more of a dark purple than it appears in the photo.
I'll take photos with a regular camera next time around, but it is handy to have the BBerry in pocket - I just whip it out and click over to the camera function and take a picture.  The camera is especially good with flowers.  It is a little less so with pictures of +Maya and even less so with people pictures, though in a pinch it is helpful to take quick snaps of humans. 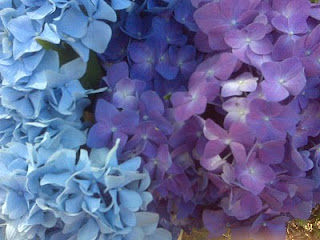 I've had flowers next to the Guadalupe candle for weeks now.  Here is Guadalupe with the last of the hydrangeas. 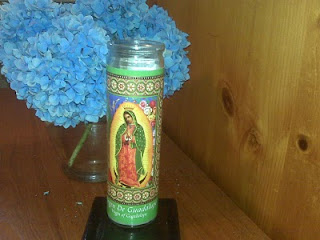 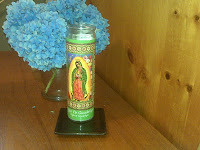 And this is what some of these flowers looked like as early adolescents. 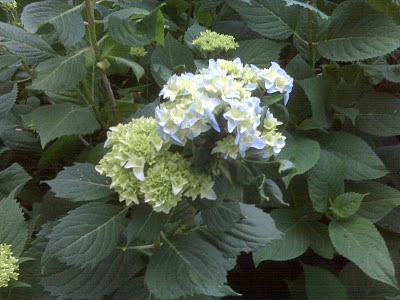 And here is the way one looked as a green, unripe baby flower. 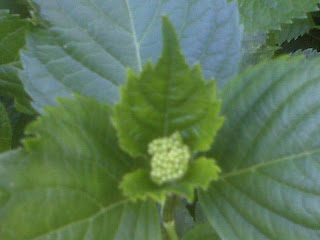