Well, the Episcopal Church has transferred the feast of Stephen till tomorrow, today being a Sunday (you can't liturgically celebrate a Sunday and a saint's day on the same day, or rather you can, but you may not).

Meanwhile, the Roman Catholic Church --or at least the U.S. Catholic Conference of Bishops-- has bagged Stephen entirely, because the 26th is not only a Sunday but the first Sunday after Christmas, which in the Catholic Church is the Feast of the Holy Family.

Since I have no liturgical celebrations to attend or at which to preach or officiate, I'm sticking to the original calendar. Today is the feast of Stephen, so there. 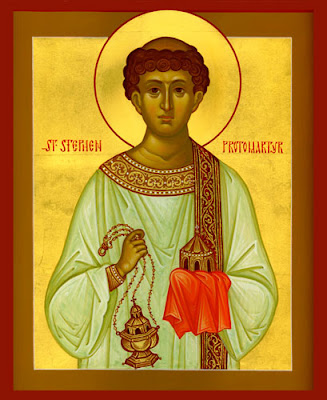 No energy, or rather, still hardly any words. Writer's block or something. Here is last year's post on Stephen, which itself has a flashback to two years before that and a feast of St. Stephen poem. Gentle readers, you have probably forgotten both posts anyway, so enjoy the (re-) read.

And thank you for bearing with me. I am well but in a bit of an odd relationship to words. Trying to find a voice again. My job tends to destroy it and I recently spent two or three weeks correcting final papers in other people's voices, many of them with bad grammar, syntax, and usage. Lord, have mercy on your indentured servants in the academy.

The commemoration of Stephen is a festival. In the Church of England (which, as you know, is above contradiction) a festival that falls on a Sunday is celebrated in preference to the normal Sunday provision unless the Sunday is a principal holy day (e.g. Easter Sunday).

You can completely ignore what the Roman Church does because it has been in error since we threw it out of the Universal Church back in the 16th. Century.

Therefore, for your unflinching loyalty to the letter of the law, I award you the OCICBW... Orthodox Pedant of the Day Award. Wear your medal with pride, Jane R.

MadPriest, I can't tell you what a deep honor it is to receive this award from you.

Also, I'm glad someone is reading the blog since I have been away from it (and other blogs including yours) for so long.

Sorry this reply comes so late. I saw your comment the day you posted it and thought I'd answered right away. Apparently I had only dreamed it. Happy New Year (um, Feast of the Circumcision of Our Lord).