I visited Deenie yesterday for two hours. After some good weeks, she has begun to feel weaker and more sluggish. This new phase began two or three days before my visit. Her energy is lower than it was. She does, however, have all her marbles, but she is on heavy painkillers and that slows her down. We talked in catch-up mode, for the most, until a few minutes before I took my leave.

After those last few minutes of conversation, the kind you would expect from friends who are seeing each other for the last time, and hugs and kisses, I said to Deenie that the Prayer Posse and I were praying for peace for her. "Make it come quickly," she said, looking at me intently.

She meant, of course, that now that she is on the decline --which she had said explicitly earlier in the conversation-- she wants death to come speedily. I commend her to your prayers, that her end may be gentle and as swift as she desires. She has been a true friend to many, a wonderful aunt and godmother, a sharp intellect, a woman of deep spirit, and a lifelong worker for justice. I am not sure whether she will live to see her 70th birthday in July. I give thanks for having seen her alive on this visit. 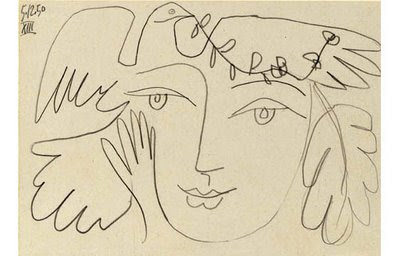 I have had a rich week in Boston, staying with Parents of Acts of Hope at their retirement community but also managing to get into the city (sidewalks! public transportation!) and see a few friends, though not all the ones I'd hoped to see. I haven't had time to blog (I may yet, from the airport or before or after the conference, in snapshots) and am off to Halifax at the crack of dawn tomorrow for a four-day conference. Links to details of the conference in this post if you are interested in theological matters.

Adorable Godson update: Thank you for your continued prayers. The Adorable Godson (age 24) is back at work and at summer school, though of course he still has many weeks of healing ahead. He is recovering from the assault and fall and getting out and about as the leg and crutches allow.
Pablo Picasso: Dove with Olive Branch (1950)
Posted by Jane R at 7:14 PM

Count me in on the prayer posse... prayers for her and for you, too

Prayers for dear Deenie offered here Jane, but we're also deeply grateful the two of you had your time together.
((((((Jane)))))))
And let me be the first to welcome you to one of our country's finest cities, small but rich with history and the arts community which populates it.
Welcome to Canada Jane
here's hoping the weather cooperates and that you have time for a real Halifax experience

Prayers for mercy. Prayers of thanksgiving. Prayers for healing, whether that means restoration of health, learning to live with wounds, or moving on to peace and glory.

Word verification: midstb. May Godde "b" in your midst, indeed.

For Deenie, the words of one of the nuns in Gerard Manley Hopkins' "The Wreck of the 'Deutschland'": "Christ, come quickly!"

Prayers for "a gentle and swift" passing for Deenie.

Prayers of thanksgiving for your godson, and for a continuing and speedy full recovery.

I'm on board too...
Safe travels for you.
Lindy

Prayers for your friend Deenie and the times you have had together. May she soon find peace.

And prayers for your Godson, that he recovers fully!

I think of Deenie every day in my prayers.

And of course - of you too.

Just took time to look at the whole CTSA program. WOW! What a program. Some of the session and paper topics surprised me very much. Sounds like there are still a bunch of lefties and social justice activists left in the RCC, TBTG.

I bet you're in hog heaven with all those theologians. Careful that you don't overdose. ;-)

Prayers ascending for a holy death for Deenie and prayers for all of her family and friends.