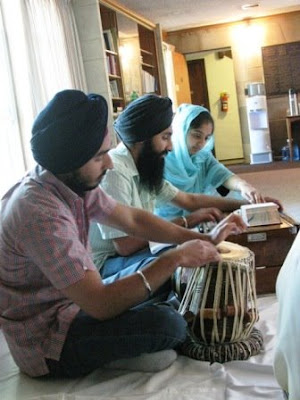 I get all kinds of ecumenical and interreligious news in the (e-)mail every day and this was one of the more interesting articles to hit the inbox. No, I don't read them all, but I like to receive them nevertheless. I am a religious news pack-rat.

So here is the article on the Sikh-Catholic retreat.

I knew Francis Tiso, the head of the Catholic delegation to the retreat, because we overlapped at Harvard Divinity School for a year during our M.Div. studies. Back then he went by "Frank" and he wasn't anywhere near getting ordained. He went to a contemplative community with Brother David Steindl-Rast after graduation, not as a monk, but as part of an experiment in contemplative living. Interestingly, he is a priest of an Italian diocese. He also did doctoral work in Buddhist studies.

Francis Tiso and I also overlapped when I was in the Bay Area and I had no idea we did. Sounds like someone with whom to have an interesting conversation.

The BBC has a good overview of the Sikh religion, with resources, here.

To learn more about Sikhism and Sikhs in the United States, go to the Pluralism Project's website, and see the section on Sikhs here.

There were quite a few hate crimes against Sikhs immediately following 9/11 because Sikh men wear a turban and their attackers assumed they were Muslim.
Posted by Jane R at 12:52 AM

Interesting Jane. I don't know much about Sikhs... OK, I don't know anything about them. I wish xianity emphasized the oneness of God more.

Fascinating: I'd like to have been there. I have three Sikh colleagues. We dialogue all the time.