Thoughts on church, change, and living the Gospel: more from Sölle and Naudé (1985)

From earlier in the 1985 interview with Beyers Naudé and Dorothee Sölle:

... If we mean by the church mainly the institution, the structure, the visible, traditional symbols, then I believe that the church, in that sense, will experience one crisis after another, until it comes to the recognition, understanding, that the church, in the real sense of the word, is where the people of God are, where life is being discovered again, the true meaning of love, of human community, of mutual concern for one another, of caring of people, of seeking true meaningful relationship, understand between people, not only between Christians but between all people. Therefore, in that sense I am very hopeful about what is happening, not only in our country [South Africa], but also in other countries, because there are new perspectives, of the Christian faith and of truth, which are being discovered and which are being, as it were, agonized about by so many small groups of people... If I think of South Africa, what encourages me is the fact that sometimes the most meaningful revelation about a new understanding of Christian faith and about the Christian church and about Christian community comes from the poorest, comes from those communities which are normally not seen to be the ones with authority or with power, or comes from those who normally never believe themselves to have any real message. But when you begin to listen to what they are saying, it is absolutely marvellous ... to discover how little I know and how much I need to be constantly converted, in my whole understanding, in my whole willingness, therefore, in true humility to sit at the feet of such people, and learn and hear. ...In that sense I believe there is a tremendous future for the Christian community in the world. 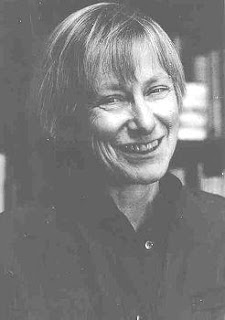 I agree... I think the growth of the true church today comes not from within but from the outside, from the peace groups, from the women's groups, from those groups who in certain fields of post-Christian culture live and think and understand more and more the meaning of the gospel, rather than those who claim to be masters of the gospel, namely those white male, middle-class theologians. ... I think that there is a growth of faith in new forms all over the world, and some of the signs of it are very classical signs, it's base communities..., it is martyrdom, which is one of the classical signs of where does the church live and grow. We in the first world, in relative freedom, don't experience martyrdom in the strict sense of the word. But I think we have to prepare ourselves and others in our midst for more restrictions, discrimination. The price to be a Christian will be higher in the next twenty years, will become higher and higher; it will be much tougher, if you really want to be a Christian. ...I think Christ didn't promise us victory. I think that would be an illusion. Christ promised us life, and that includes death. Christ didn't tell us that we would win. Other people tell us that all the time... We hope to win; we fight to win; we give our blood and our lives... but I think we cannot understand our own struggle in terms of success and non-success.

Hope for Faith: A Conversation
jointly published by Eerdmans and the World Council of Churches in 1986

Ah, this brings tears to my eyes... Thank you so much for this.

I've missed your blog a lot. Thanks for this Jane.