Quoted in The Tablet

The Tablet, whose articles you can't read online unless you subscribe, is probably the best Catholic periodical on the planet, or one of the best. It is certainly one of the most respected in the Northern Hemisphere and perhaps beyond. Published in England, weekly, thoughtful, thorough, independent. 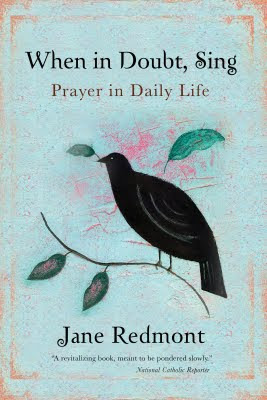 Like all periodicals I'm sure they are struggling to stay afloat, so that may be the reason for the Web gatekeeping. Either that or the spammers and trolls.


At any rate, a dear friend wrote me yesterday morning with the news that I had achieved fame: The Tablet quoted me! More precisely, it quoted a passage from When in Doubt, Sing. Even more amazingly, the passage in question was in the good company of the Psalmist, Meister Eckhart, and Thomas Dorsey!

(But good for the ego too during a hard week.)

(A new issue is just out with comment and analysis on the latest Catholic/Anglican brouhaha.)


Here are the quotes as they appeared:

The living Spirit [name of the feature / column]

Both perfectionism and self-forgiveness bear a direct relation to our understanding of God. The first step of prayer is telling the truth about who and where we are. It is also, at the same time, learning the truth about who and where God is. We are the ones who tend to place limits on the mercy of God. Prayer involves a capacity to stretch our imagination, to imagine and therefore to begin knowing a God who is not a projection of our own self-condemnation … The idea that prayer is somehow a production (in the economic or in the theatrical sense – both are destructive) will take us away from prayer.


Our steps are
made firm by the Lord,
when he delights in our way;
though we stumble, we
shall not fall headlong,
for the Lord holds us by the hand.


If you have failings, then ask God frequently in prayer if it may not be to his honour and pleasure to take them from you, for you can do nothing without his help. He gives to each according to what is best for them and most suitable. If we are to make new clothes for someone, then we must make them according to their dimensions, and those which fit one will not fit another. We measure everyone to see what fits them. So too God gives everyone the best thing of all according to his knowledge of what is most suitable for them. Indeed, whoever trusts him entirely in this, receives and possesses in the least of things as much as they do in the greatest.


When the darkness appears and the night draws near,
And the day is past and gone,
At the river I stand,
Guide my feet,
hold my hand;
Take my hand, Precious Lord,
Lead me home.

It is not surprising to find you in such good company.

I admit that I only got around to reading the book the day, or maybe two days before I left. I intended to write to you right away add thank you for such a wonderful gift. I wished I'd read it earlier, and regretted that I was having to rush through it as I would have liked to stop and think about several spots. I thought it was extraordinarily well-done; a book which avoids rehashing various recipes for successful prayer and dares to speak honestly about prayer in it's many forms and difficulties. I wished that I'd read it sooner, and I am sure to read it again.