Someone on Facebook asked why my parents got married in Mexico City.

Since it's too long an answer for Facebook, here goes.

My father got his master's degree at the Columbia University Journalism School. He was not yet 21 years old. He graduated at the top of his class (1939) and was one of three recipients of a Pulitzer Traveling Fellowship. This gave him the opportunity to travel and write for a year.

He headed for Europe in June. He knew by then that he wanted to be a foreign correspondent. He traveled through Western Europe, then Eastern Europe and the USSR and back to Western Europe. Well, if you remember your world history, you remember what started happening on September 1, 1939. World War II broke out.

My father had hoped to stay and find work as a war correspondent, but despite his letters of recommendation, he couldn't find a job, and he went home, not on a Cunard liner as he had on the way over, but on a freighter taking refugees back to the U.S. Among the passengers was my father's cabin-mate --not by choice-- who turned out to be, so he said and my father had no reason to doubt him, Prince Felix Yussupov. You may remember him as the man who killed Rasputin. My father notes in his memoir that he "had never before met anybody who had killed a man, let alone boasted about it. Sharing a cabin with him was fun on an otherwise tense voyage, but I didn't sleep too well thinking about my new friend, the murderer." (p.23)

FoAoH decided to finish up his fellowship in Mexico City, so off he went. There were many estadounidenses there at the time: Mexico was warm, welcoming, and inexpensive. It was also, as my father discovered, desperately poor, and the Mexico City metropolitan area was already crowded then with a population over five million. He started freelancing and stringing (working part-time) for several newspapers and news services.

After he'd been there for a while, MoAoH got sick of waiting up in Brooklyn. She'd finished college by then, so, as I like to tell it, she said to her parents "Bye-bye, I'm going to marry FoAoH!" Okay, it wasn't entirely like that. My parents had both turned 21 by then, it was now early 1940, and my father saw that they could live quite well on under $15 a week, so they decided that they would get married sooner rather than later. My father wrote a letter to my mother's father, as one did in those days, and promised he would take good care of her. They had known each other for years so my mother's parents knew my father was a trustworthy sort, and they knew my parents wanted to get married. People didn't "get engaged" in those days, at least in my parents' circles. It was the Depression and nobody was buying or showing off diamonds on their left ring fingers, and my mother's family was never terribly conventional anyway, though they certainly believed in marriage.

My parents met at James Madison High School in Brooklyn, New York. They didn't become sweethearts till college but were in the same group of friends in high school. Like many in their high school --mostly children and grandchildren of Jewish immigrants-- they attended public colleges: she went to Hunter College, which was all women at the time; he went to City College, which was all men. Both of those schools were way uptown in Manhattan, of course, and my family's version of "In my day we had to walk five miles to school in the snow, uphill in both directions!" was "It was the Depression, we lived at home, and we took the subway to school an hour and a half in each direction." Three hours of commuting a day to get an education. My mother is the one who talks about this.

My father was editor of the college newspaper and helped get a corrupt college president on the road to resignation, but that is another story and you can read it in FoAoH's memoir. He went on to a private university (Columbia) for professional journalism study. My brother also went there, years later, and I contemplated doing the same but didn't.

Back to the Mexico story. My mother took the bus down to Mexico City from New York. Yes, the bus. More like buses. I think her first stop was Indianapolis because she had an uncle there. Not sure whether or where she stopped after that, but it was a five-day trip. At any rate, she got to Mexico City safe and sound on a Friday, and the following Tuesday she and my father were married.

They married at the American Embassy because they were patriotic young people and wanted to be married on American soil. But the Ambassador wasn't empowered to officiate at weddings (unlike some other foreign diplomats) so they got a Mexican Justice of the Peace. Only civil marriages were valid in Mexico. A wedding at the JP's Registry office would cost two pesos, but they decided to splurge and go for the 32-peso wedding, which is what it cost to get married outside the Registry. 32 pesos in those days was about 8 dollars.

Foreign Service officers couldn't officiate at marriages but they could witness them (in the church that's the same thing, so I don't quite get the distinction, but there you have it) and issue a certificate of marriage so in addition to the Mexican wedding certificate, my parents got a U.S. certificate (for one dollar extra). I'm not sure whether the Consul General or the Ambassador signed the piece of paper, but they were both there. The Ambassador at the time was Josephus Daniels, a former Secretary of the Navy under President Woodrow Wilson who was a former newsman -- how appropriate. I remembered he was a Southerner, but what I had forgotten and just re-read in the Mexico chapter of the memoir is that he was the founder-editor of the Raleigh News & Observer. That's Raleigh, North Carolina.

Meanwhile, my paternal grandparents had expressed the desire for my parents to have a Jewish wedding ceremony, so several days later PoAoH located a rabbi, which in Mexico City was not so easy, and he witnessed and officiated at a religious ceremony. It was in Spanish and Hebrew and they had a sheet or a tablecloth for a chuppah (the traditional wedding canopy) and my father didn't have a kippah (yarmulke) so he used a handkerchief tied at four corners. The part of this story I love is that the rabbi lived on Jesus Maria Street. Now there's a title for a novel: The Rabbi on Jesus Maria Street.

Parents of Acts of Hope did have a little reception with a wedding cake. The cake was the work of two Greek-American pastry cooks from Manhattan who after fighting in the International Brigade in the Spanish Civil War (i.e. against Franco's forces) had settled in Mexico and opened a restaurant and bakery.

My father's memoir doesn't say and I haven't asked my parents, but it occurred to me a few years ago upon re-reading my father's description that these guys, Nick and Mike, were probably a couple. But maybe they weren't.

The cake had two white doves on top. 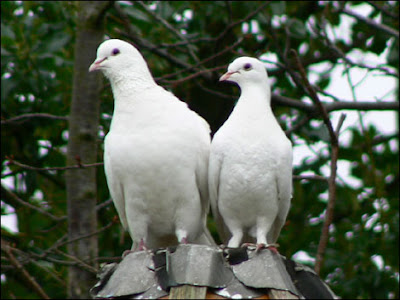 The big story in 1940 in Mexico was, of course, Trostsky's assassination, and my father, as a freshly minted journalist, got to cover it. There was a substantial cast of characters in the background shenanigans leading up to the assassination, including an American woman who had been one of Trotsky's aides. My father was stringing for the Jack Starr-Hunt News Service and among their clients was the N.Y. Daily News tabloid, which could care less about the politics of the story. Who cared if Stalin's arch-enemy had just been killed? The Daily News fired off to my father a cable that read "RUSH 1,500 WORDS GIRLIE ANGLE." Welcome to highfalutin foreign correspondent work.

After a few months in Mexico, with the fellowship year over, my parents returned to the U.S. and Brooklyn, where both their families lived. My father got a stop-gap editing job at the Brooklyn Academy of Music while hunting for a real job in journalism. At last, after six months, a real job materialized, and off my parents went to Herkimer, New York (for those of you who don't know, that's in the boonies, at least from a New York City perspective) where my father worked on the Evening Telegram newspaper for the magnificent sum of $35 per week.

The following year Pearl Harbor happened and my parents moved to Washington.

What an awesome tale - and it sounds dashingly romantic to me.

Great story, Jane. It has everything: romance, adventure, even murder! Someone call Marty Scorsese, this should be a movie.

Wow, there is a book here, to compliment your father's memoir.

Compelling... you had me transported away and completely absorbed as I read this.

Blessings in abundance to the Parents of Acts of Hope and of course to you as well.

Great story!
Blessings to you and your whole family!

What a treat, Jane! You told that story so well that I can't wait to read about what happened next.

I agree that this has all the makings of a great movie! Thanks so much for sharing--and sharing so well!

Finally, more of the story; it's wonderful.

You know that Josephus Daniels, while Navy Secretary, left most of the work preparing for war to his young Assistant, who gained valuable high level administration experience for the next time he led a national defense build-up, in 1940, as President: FDR.