The Washington Post has this to say on the matter of non-allergifying dogs. 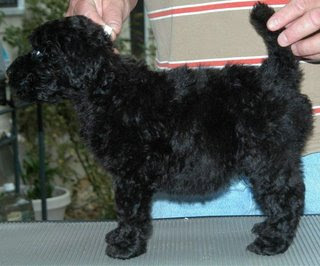 More of Doxy's Dog here and here, a year later. As for Senator Ted's and Ms. Victoria's dogs, one of them is a book writer.

On the cat front, Her Grace Maya Pavlova has rediscovered her catnip mouse, which had lain in its basket of toys for weeks and weeks. She grabbed it yesterday and chased it halfway around the house. Go figure. +Maya was in a frisky, playful mood. A visitor and I speculated yesterday evening that it could have been the scent of the visitor's dog (who did not come to visit), a male pug by the name of Kevin (not to be confused with my friend Kevin's dog, whose name is Andy) -- or maybe it was the full moon.

(Note: I am allergic to some animals and not others. Miss +Maya is a mutt cat, but non-allergifying, to me anyway, whereas I had to return not one but two other cat mutts to the shelter a few days after taking them in, the year before she came to live with me, because they gave me serious asthma. It's a dander thing.)

And in case the Obamas are worried about allergies, really and truly, Doxy said the Portuguese Water Dog was non-allergifying, and if they don't believe Doxy, they can take Senator Ted's word. Have a look at this man-loves-his-dog story and interview. (Read it till the end for cute trivia about an episode with Biden and Wellstone - and the dog. There's also an audio of a piece of the dog's book.) And here's the picture from the article. 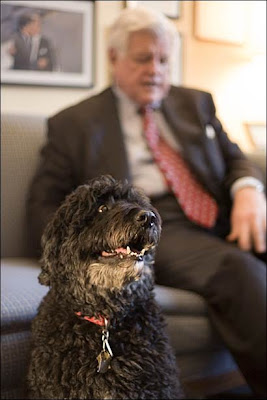 This blog post has been approved by +Maya Pavlova, Feline Bishop Extraordinaire. Acts of Hope is a multi-species-friendly blog, in full communion with dog-loving blogs.

One thing they don't tell you about Porties is that they are ALMOST as energetic as Dalmatians. Caveat emptor, and all that... ;-)

You and +Maya are ensamples for us all as we journey, fitfully, toward harmonious co-existence.