Pray for the OHC monks of Mt. Calvary, California

I read last night on my friend Paul's blog that Mt. Calvary, the California residence and retreat center of the Order of the Holy Cross (Anglican Benedictines) was devastated by fire yesterday.

Both Paul and I have ties of deep affection with the OHC monks, he with the Santa Barbara crew and I with the smaller crew at the Priory in Berkeley, which has recently undergone the process of dismantling and merging with the California and West Park, New York monasteries. You can read about the fire and the monks here, chez Paul. Very sad news, though thank Godde all the brothers are safe, so the loss was of things and not flesh. 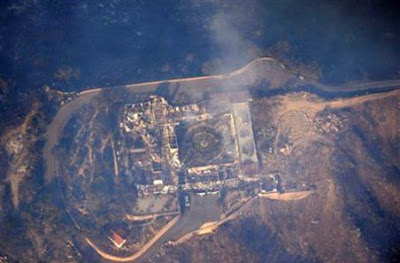 I have been pondering those realities of the "stuff" we carry around and our attachments to it since the tree fell on my former house, as I continue to go through things rescued and moved haphazardly.

I also had horrid nightmares last night, but they were largely about the biennial faculty evaluations and pre-tenure review at school.

In another dream, I walked all the way from Boston to a women's monastic retreat house on Cape Cod, but it took only two hours and for some reason my parents (who generally would not go near a monastery) were meeting me at the retreat. And the road looked familiar. Apparently I had walked it before -- perhaps in another dream, which I remembered inside last night's dream.

Pray for the brothers of the Order of the Holy Cross, who keep their core of contemplation, but who are human as we all are, and who have been displaced by violent weather in the form of wind and fire.

My friend Richard is an Associate of the order, as are several other friends, and I have been pondering making that commitment myself for a few years now. (Though the St. Helena Breviary is more to my liking --more on the Order of St. Helena here-- but I have an abiding love for the Benedictines, and for some reason their communities of men feel welcoming and comforting to me. There's probably some deep psychological reason for that, or maybe it has to do with my being hetero, but ultimately the "why" doesn't matter.)

Grant peace and comfort, O giver of life, to all your children displaced by fire, that they may find shelter through the hospitality of their neighbors and know anew their dearest home in You. Through Christ our strength and our salvation, Amen.

Prayers, Jane, for the monks of Mt Calvary, and all who have been touched by their witness. Thank Godde, indeed, that there was no loss of life.

How very sad and such a terrible loss. My prayers are with them, and thank God no loss of life occured.

Prayers for the Benedictines of Mt. Calvary.

Prayers for you, too, Jane, that your nightmares may ease.

Impermanence. I once had a conversation with a monk of the Capuchin Franciscans on West 31st Street. He asked me if I had any conclusions about the events I'd witnessed earlier that day. I could not think of much of anything but finally said "We build and we build and none of it matters. Human beings matter. God can take from us all the works of our hands, but people are what matter now." I was bullshitting the monk, only to discover when I lost everything that I'd been telling the truth all along.

The monks suffered an awful loss. We can and will pray for them to find the strength to overcome their grief...and then start to rebuild.

Prayers for the monks, and for all those facing the loss of their homes in this terrible fire storm.

Prayers for you jane. and I weep for our dear brothers.