'tis the warm season of lizards lounging in the sun, and the ones who lounge on the walls and windowsills of my house are pretty, electric blue-tailed ones. When they appear and slither along the outside of the windows, Maya Pavlova makes guttural cat-sounds and flicks her tail and runs along the windowsills (inside - she's not allowed outdoors). In my study there are two windows, almost a whole wall's worth of window space, and the inside windowsills are narrow enough for a little cat bottom and little cat feet.

I haven't managed to photograph one of our house lizards yet, but here is what they look like: 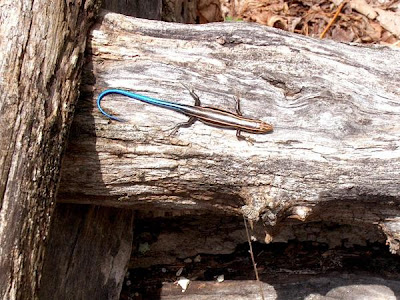 The tail is even more shiny and electric blue in real life. The rest of the lizard's body is shiny, too. I don't think they are phosphorescent at night, but they look as if they could be!
Posted by Jane R at 1:44 PM

that lizard is so freakin' cool! i think if I were Maya, and I fit on the legde, I would follow them too!

Do you know of any way to attract lizards? I am thinking of more channels on cat TV: the new deck.

Oh BooBoo would love that!!!

i have these lizards, too. i've lived in nc before and never saw them, but in our new house, they're everywhere. i can't get a picture of them, either. fast little things.