Rising Meadow Farm and religious pluralism in the U.S. 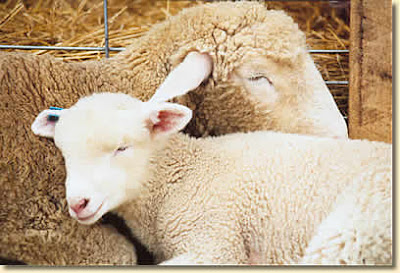 I think I posted a link to this farm in a previous foodie post some weeks or months ago, but just in case, here it is again. Rising Meadow Farm is in this immediate region of the North Carolina Piedmont, a drive of an hour or two away, and it has beautiful sheep who give gorgeous wool, as you can see by clicking your way around. Very nice material for you knitters and weavers out there. It also has lambs who give their life for your dinner table. The farmers are appropriately grateful for both.

I was delighted to see on the package of stew meat I bought today (frozen - they do this with all the meat since there is local transportation involved) that the processing is done by a local halal institution. Halal, for those of you who don't know, is the Muslim equivalent of kosher: if a butcher is halal, this means it follows Muslim religious law, which, like Jewish religious law, has guidelines for the treatment of animals. Yes, this is all right here in North Carolina.

Want to read more about religious pluralism in the U.S.? Have a look at the website of the Pluralism Project, which I use in my course on the History of Religion in America (Religion 101, actually about 3/4 historical and 1/4 contemporary) here. If you don't have time for school, or even if you do, this is a great resource with pictures, primers on many religious traditions, recent news (updated daily) on religious issues in the U.S. especially from religions we don't tend to think of as "American" (though they now are), and other interesting religious matters. Hindus in the Boston suburbs! Muslims in Mississippi! Cambodian Buddhists in New Hampshire! Great visuals too. Enjoy and learn. 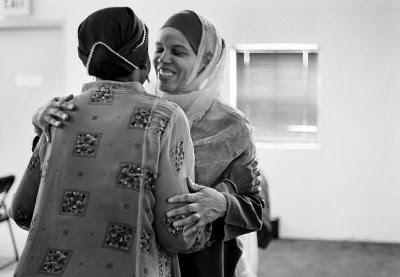 As for the lamb (she says, feeling a little embarrassed to be de-vegetarianizing) I am probably going to save it for next weekend since it is frozen. It is stew meat and I have made great stews in the past with my grandmother's stew recipe which Mother of Acts of Hope reconstructed for me, but it is not quite stew season. I bought the meat because it was cheaper than chops or rack of lamb and other cuts not quite within reach of my budget. It is from such a good source, though, that I can probably grill it just fine. I will probably marinate it first. Stay tuned. For now, I'm eating tomato salad and goat cheese on whole grain bread. The corn, by the way, was very good, though not quite as good as Vermont corn, but I have a Vermont bias in matters of corn on the cob.
Posted by Jane R at 10:20 PM

The Pluralism Project looks amazing - I have bookmarked and will look at it later.

Related abut not related but really related... A number of years back one airline stopped serving kosher food, but not halal food. Go figure. It caused an uproar, but there are many similarities to the preparation.

That said, I do understand the underlying need for one's own way.

It is just - pardon the pun - food for thought.