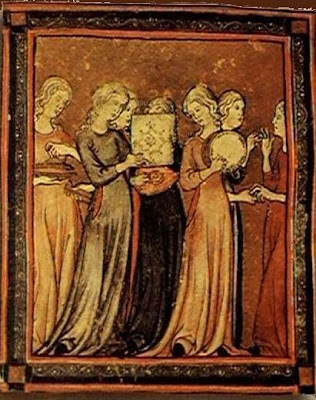 I spoke with P.'s partner B. earlier today and P.'s recovery is proceeding as well as can be expected. He's at the grumpy-and-in-pain stage, which I remember well from when my father had his CABG. But he's where he is supposed to be and the medical and nursing care at the hospital is excellent and very attentive. And kudos to the staff, all up and down the line, for courtesy and warm behavior toward B. as a same-gender partner. We shouldn't have to notice when people who are family to each other are treated properly, but since it's not the norm everywhere, especially with same-gender couples, we do. Would that this courtesy and kindness were the case all over the U.S. and all over the globe.

Today's Psalm from the Tikkun HaKlali, the Complete Remedy according to Reb Nachman of Bratslav, is Psalm 105.
Note: The commentator uses "He" a lot for G*d. Do not let the language keep you away from Godde. Change the gender if you need to. I am not doing so because I am quoting from a book, but in prayer I would change the language.
Rabbi Maurice Lamm writes in "Breaking the Spiritual Gridlock: An Introduction to Psalm 105," one of the chapters in the book we've been following (see bottom of this post):
****If we are going to heal from illness we need to break two kinds of spiritual gridlock. One paralyzes us so that we become passive and resigned; the other steals the very song from our throats, leaving us with only a groan. The spirit evaporates from our souls and we become submissive and flat. Psalm 105 teaches two positive ways to heal, and healing is the essence of health.
****First, when illness de-activates us, we follow a prepared script and act like victims--we become couch potatoes, helplessly watching ourselves get weaker. We are fed and injected and analyzed and tested and predicted and watched over and prayed for and spoken of behind our backs. It is a gridlock and paralyzes us and makes us feel worse. Psalm 105 tell us: "Don't act like a victim."
****Notice how the psalmist erupts and fires off ten staccato charges in five sentences--give thanks; call Him, make known His works; sing to Him; praise Him; speak of Him; glory in Him; search for His presence; seek Him; remember Him! To heal, to become whole, we must respond even ten times; energize our minds; and not allow ourselves to sink into victimhood.
****... It will require heroism to take our mind off our condition, to take control of our souls, to be courageous, to feel empowered again. You may say: "I can't think of anything else." Perhaps you can't, but try it. ...
****Now break the second gridlock. In the ten charges of the psalmist, one appears not to fit --"Sing to Him!" What's the value of a song? In our sophistication, we think of singing as an art form; but the Torah teaches that to sing is a blessing. In terms of the spirit, singing is on a higher level than speaking--it is why the Levites sang in the Temple. The word shir, meaning song, also derives from shur, meaning insight. When we sing we raise our souls to God, and we gain insight into Him. Through song we address God.
****And through song we learn to better endure our hardships. When life is not a song, sing! When King David was ill, he sang; when Cervantes, the great writer, was ill, he said: "He who sings frightens away his ills." ... Singing is an antidote to panic. The Hasidim taught us that. It lightens the burden, lessens the fear, steadies the nerves. Singing gives voice to our deepest feelings; it enables us to express ourselves even if we are the only ones who hear it. And we will have made ourselves heart. Singing lifts the heart.
****Even if all we do is chant "Oy Vay," over and over, to a tune we improvise--Shiru lo, "Sing to Him." Even a melancholy song somehow takes us out of ourselves and gives expression to our inner being. Sometimes I break out in a niggun--a melody that uses sounds shaped only by my emotions. It articulates a groan that forces its way oout of my interior; sometimes, it expresses an indescribably joy inside me that's in search of an audience.
Note from Jane: I am struck by how related this is to the African American Spirituals, the "sorrow songs" of slavery which are classics and still sung and listened to today. Many of them, like the Psalms of old, are laments. In naming suffering, they transcend it and in some ways also revolt against it. Laments help us both to survive and to resist.
******
Singing with friends, says Rabbi Lamm, harmonizes our own souls with the souls of those who empathize with us. The harmony, in magical ways, transfers the energy of the group to us fragile individuals as we lift up our voices and keep time together.
****Sing what you like; help others by offering to sing with them. ....
****To groan when we are ill is common; to sing is courageous. Think actively, sing passionately,. It will break the most common gridlocks of illness, and let our souls soar to new heights.
As for Psalm 105, it is really long.

I'm just going to post a few pieces of it, including the one to which Rabbi Lamm refers at the beginning of the long passage from his chapter (oops, sorry, Fair Use people; this really is fair use):
Give thanks to Adonai, call upon His name;
***Let all nations know about His deeds!
Sing to Him, compose songs, play instruments for Him;
***Tell all about His wondrous acts!
********
Take pride in His Holy Name;
***The heart of those who seek Him rejoices!
Search for Adonai and for His might,
***Seek His presence always!
Remember the wonders He has performed,
***His miracles, and the laws from His mouth.
Then comes the story of Adonai's relationship with the people of Israel from Abraham on, with Jacob, Joseph, Moses, Aaron (no Miriam, no women), the Plagues and the Exodus, quail and manna and water from the rock...
For He remembered His holy word, His promise
******to Abraham, His servant.
He brought out His people with gladness,
******His chosen ones with joyful singing.
He gave them the lands of nations,
******they inherited that which nations acquire by labor.
So that they might keep His statutes,
******and treasure His teachings,
*********Halleluyah!

I know, it's an Alleluia during Lent, but I'm quoting. ;-)
Besides which, we're doing this in the context of a Jewish commentary.

Illustration above:
***
***Commemorative International (in the text about an Israeli coin modeled on this image) writes:
*****
*****The Bible abounds with stories about Miriam, Moses and Aaron's eldest sister. We learn about her heroism and her compassion, as well as her great intellectual knowledge and leadership abilities.
*****The book of Exodus, describing the Exodus from Egypt, offers a depictive description: "And Miriam, the Prophetess, Aaron's sister, took the drum in her hand and all the women followed her with drums and dance" (Exodus 15:20). While others were complaining about the desert conditions, Miriam was giving thanks for the great and miraculous Redemption that had just occurred after the parting of the Red Sea.
******
*****The drawing ...was chosen from "
The Golden Haggadah" printed in Barcelona circa the year 1320. The pictures in this Haggadah, among the earliest and most spectacular of the Sephardic Haggadahs, portray the events and characters beginning with Adam in the Book of Genesis and ending with Miriam's song in the Book of Exodus.
Posted by Jane R at 8:22 PM

Good one. You caught me with the phrase about "acting like a victim," as I remember some of my medical and other issues. But then you turned it into "how to pray and praise when you're feeling like a victim."

Thank you for this.

You're welcome. 'course I didn't say it, the rabbi did.

Yeah ... but you carried the message.