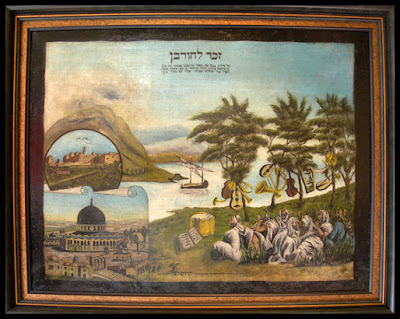 Psalm 137 is today's Psalm, the ninth in the series of ten healing Psalms according to Rabbi Nachman of Bratslav.

This beloved, well-known, poignant Psalm is best known for its first six verses.

The end of the Psalm makes it one of the "angry Psalms," and a particularly shocking one at that, with its violent image. What shall we do with it? The other "angry Psalms" can be consoling, especially if one is despondent, depressed, feeling powerless, turning one's anger inward. But calling God's rage upon the children of others is another matter entirely. It feels far more horrible than calling God's rage upon one's enemies.
I have no answer for this, and today's commenter from the book, Rabbi Amy Eilberg, does not really address this dilemma.
Jewish and Christian traditions, including African American Christian traditions, have embraced this Psalm of exile and clung to it, and even transformed it (there is a fine book on African American Catholics called Taking Down Our Harps) - but they usually stop at verse 6.
Is the end of the Psalm something we need to say no matter way, lest we edit the Psalms at will and edit out their anger and passion?
Or is it one of those "texts of terror" that we should study like other texts of terror but not recite or listen to as holy scripture?
Here's the Psalm. Tolle lege, and see what you think and feel.
By the rivers of Babylon,
***there we sat and we wept
******as we remembered Zion.
Upon the willows on its banks
***we hung up our harps.
For there our captors demanded of us
******words of song;
***Our tormentors asked of us (with) joy:
*****'Sing to us the songs of Zion!'
But how shall we sing the song of Adonai
***on alien soil?
If I ever forget you, Jerusalem,
***may my right hand forget its cunning!
May my tongue cleave to the roof of my mouth,
******if I remember you not;
******if I do not set Jerusalem
*********above my highest joy!
Remind the songs of Edom, Adonai, about the days of Jerusalem--
***Remind those who said,
******'Raze it, raze it to its very foundation!'
Daughter of Babylon,
***it is you who are the annihilated one;
******Happy is the one who will repay you
*********for all that you have done to us!
Happy is the one who will grab your little ones,
***dashing them against the rock!

Rabbi Eilberg writes that she "had always read Psalm 137 only in historical terms, the homesick lament of the Jews in exile in Babylon, weeping for Jerusalem, their home. But to read the Psalm through Rabbi Nachman's eyes is to imagine the lament as my own, as a cry of despair and longing in my own times of pain and lostness and confusion, when I am disoriented, forcibly removed from the normal, comfortable times and places of my life. Rabbi Nachman invites us to read the psalm as our own cry, our own prayer, inviting us to move, as the psalm does, from despair to joy to power."

I gave you my commentary as much as Rabbi Eilberg's (there's more of hers in the book, but the paragraph above is a good summary introduction) and would be interested in knowing how you read and hear this Psalm, especially when you read it in the context of your own illness, suffering, troubles, and healing.

This makes me want to go to Reb Nachman's teachings to find out what he said.

Art: "A rare large framed Hungarian 19th century Jewish oil on canvas painting depicting the remembrance of the destruction of the Temple, in Hebrew "Zecher Lechurban" above the words of "The Rivers Of Babylon." Very vivid and colorful oil with various Jerusalem scenes, the painting is signed by an unknown Hungarian artist. It is a Jewish custom leaving a small part of the home unfinished in memory of the destruction and this painting covers that particular place. 88cm X 72cm." Via IVAntiques
Posted by Jane R at 7:37 PM

This is a hard saying.

I have sat by alien waters and wept. And I've sat with those in Sudan who did the same. Grieving. And -- God help me -- having thoughts of vengeance about those who caused me grief. A totally human psalm? You betcha! But how it fits into holy Scripture and into my notion of God? Not a clue.

I think much that is in scripture is human and not divine... the last verses of this psalm are simply human rage and anger.

I don't think we should edit these things. I agree with Kathleen Norris that we make nice a little too much with scripture... only reading the parts that agree with us. I think we have to grapple with it all, the beautiful, the ugly, the uplifting and the horrific. And... what's the old feminist catchphrase?... wrestle with it until it finds a blessing.

Here's one totally off the top of my head: is this a memory... perhaps a mother's memory... of what was done to her own children? Not that it excuses is in the least. But... sometimes I think that the painful memory has been preserved is the blessing.

Another psalm tells us that our pain and anger make us seem like beasts in the presence of God. And, while that is true, there's this psalm which reminds us that we might be angry and also write beautiful songs. In that sense, it's very hopeful.

Thanks, Jane, for these great posts. I liked the art too... the harps hanging from the trees. Sometimes when I read that I almost feel like the hanging of the harps was an act of defiance. They are saying, "Well, we do have these harps, and we do know the songs, but we are not going to sing them for you." And, of course, at other times it seems more like an act of resignation.

I have lived in exile too, and I think it is only natural to wish revenge on those who have destroyed one's life. Of course we Americans think we are against violent retaliation, our contemporary sensibility doesn't like the idea of killing our enemies' babies...but U.S. forces have done that, paid with our money as taxpayers, in the context of what our government still defines as a "war" against only vaguely specified enemies. The Psalm can help us empathize with people who live in conditions unimaginable to most of us, deprived of not only home but also food and elementary sanitation, incapable of understanding the rationale of those who caused such suffering, and angered to such a point that only a violent image can express their distress.

Returning to exile in Zion, which had become Babylon in my absence, is a deep part of my adult formation.

"Sing us a song of Zion" reminds me of Bush I said of Vietnam "That war cleaves us still...Surely the statute of limitations has been reached." (Inaugural Address, Jan. 20, 1989) Relax: take it easy.

I hear it as accurately identifying a particular pain to Godde, who will make it right no matter how we articulate it.