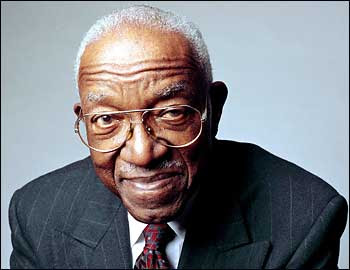 The great historian John Hope Franklin died yesterday at the age of 94.

The Washington Post has several pieces about him including an obituary and tribute with a slide show here.
Duke University, one of the schools at which Professor Franklin taught, has a biography here.

From the WaPo obituary by Wil Haygood:

Franklin was among the first black scholars to earn prominent posts at America's top -- and predominantly white -- universities. His research and his personal success helped pave the way both for other blacks and for the field of black studies, which began to blossom on American campuses in the '60s.

"He gave us a common language," Gates, director of the W.E.B. Du Bois Institute for African and African American Research at Harvard, said yesterday. "As the author of a seminal textbook, 'From Slavery to Freedom,' Franklin gave us young black scholars a common language to speak to each other. He had invented a genre out of whole cloth."

Gates, a former recipient of a MacArthur "genius grant," for years was curious as to who had recommended him. He attended a dinner once with Franklin, and Franklin confided that he had been the one to recommend Gates. "And I cried at the table we were sitting at. A lot of us called John Hope 'the Prince.' He had such a regal bearing. We're all the children of John Hope."
Posted by Jane R at 1:10 PM

A great man and scholar; I was surprised yesterday to hear of his passing. He had been a major part of American History for a long time, much of which he created almost ex nihilo.

May he rest in peace and rise in glory.