I have been cooking an essay called "Lost Things" which has suddenly started flowing out of my fingers. It may or may not be my next piece for the Episcopal Café, whose editor has been extraordinarily patient with my absence from my contributor duties during this difficult year. I have been musing about the things I have lost or have had stolen from me over the course of my life and about why their absence bothers me. The essay comes straight out of those musings.

In the course of hatching a rough draft, I have remembered once again one of my favorite books from childhood, one which I reread many times as a young adult and which my parents had to give away or leave behind during a major move. I cannot hope to track down that very copy of the book but in these days of the World Wide Web it is possible to find a book that has long been out of print. Every so often I search for it on the internet.

Lo and behold, after two and a half pages of writing I began poking around for the first time in months, and I found not only copies of the book available for sale but confirmation that the book was in fact the one I loved in the form of a picture of the book cover! The first few copies I saw online had either no picture of a cover or a very different picture from the edition I remember. So here is a picture of my beloved book. At some point I will order a copy for myself, or perhaps I will wait till my next trip to France or ask a friend to get it for me. I really want to read the book again but I am just happy it still exists somewhere. 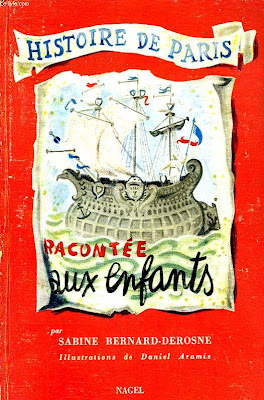 By the way, the book is full of wonderful fables and legends and tales: how certain streets in Paris got their name, what a fortune-teller said to one of the Medici queens (two Medici women married French kings), who built what when, and how the city got its start. That part is not fable but historical fact. It is through this book that I learned about the Parisii, the tribe that gave Paris its name. Paris was a city of boat people, clustered on a few islands that were later consolidated into the two islands we know at the heart of the city. The Romans, of course, took over the islands when they conquered Gaul, did a lot of building, and named the city Lutetia (Lutèce in French), though some sources say that the city's name was already Lutetia by the time the Romans conquered it in 52 BCE. Bits of Roman amphitheatre and baths survive, but the Parisii came first and it is their name that endures.

The book is also chock-full of stories of the saints, and I still remember them: Denis, martyred (on what became known as Mons Martyrium, later abridged to Montmartre) and carrying his head in his hands all the way to what is now the town of St. Denis, where a basilica commemorates him; Geneviève the shepherd girl, praying away the Huns; and others, but those two especially.

Interesting how stories pour out of us when we are ready, or sometimes long after we were ready. I should have known by the grumpy mood of the last few days that I was cooking several pieces of writing. Reports and other mundane word processing stood at the doorway and blocked them. I must get back to those duty-bound words, but now I know what was ready to come forth, and there will be no stopping it.
Posted by Jane R at 11:58 PM

A childhood book can touch our souls in many ways and for the course of our lives, dynamic and filled with so many things, not a static moment in our history.

Reading this post reminds me of my own pilgramage, of sorts, out to the basilica of St. Denis. It was on that 1989 trip, although not to St. Denis specifically, that the sparks of some kind of Catholicism, came calling back to me.

Excellent Jane.
...and there will be no stopping it.