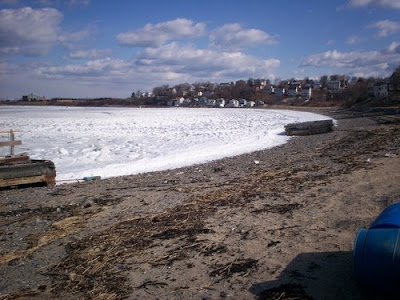 Some of you may remember Deenie, who is an old friend of mine from Boston and has been ill with a rare and terminal form of cancer for some months.

At the time of the last update, Deenie had taken a turn for the worse and had surgery on her face to remove a cancerous growth which had made it hard for her to speak. I asked for your prayers.

Deenie got better. The friend who is keeping folks updated wrote an e-mail ten days ago titled "Deenie regaining strength: miracle or just moxie?" It read, in part,

***Whatever it is, your prayers must have packed a wallop. For those of you who didn't know (...) Deenie is now at [name of rehab center]. She's so much better ...
***The swelling in her face from the last operation has gone down, the stitches are out, and the scar, well, it's there, but not really disfiguring. Her hair has grown back since the brain surgery. The pain is under control. She's able to use a walker to get to the bathroom, she's getting speech and physical therapy, and she's eating real food again (not exactly home cooking at this institution, but it's acceptable). However, the tumors in her left thigh are growing very fast. That's the rough part. Apparently it's a rare development in a type of soft-tissue cancer that is usually slow-growing and which she probably had for years without realizing it.

***Deenie is going home tomorrow (Wed. May 13). Between her neighbors and her friends, plus an aide several hours a day, it seems she'll be able to manage.

Deenie will die soon. She knows it. She is also living well. I worried during most of this year that I would not see her alive again, but the academic year is over, I am going to visit my parents in Boston in a couple of weeks, and I will have time to go to and visit my old friend. With her strength and Godde's grace, I will be able to see her and spend some time with her.

Dear Prayer Posse, please pray that Deenie will live well in the coming weeks, that she will have good care and be comfortable, and that she will continue in her tenacity and clarity. Hospice workers say that people often die the way they have lived, and Deenie has always been a woman of spirit and strength. May she continue with courage and peace as long as she remains in this life.

I'll pray for Deenie as requested, and for you.

I have seen people die in abject terror (my mother) and with bravery (their names are known only to a few of us). Indeed, death is the extension of life. Deenie sounds like she has fought and conquered the twin demons of Snivel & Whine. I hope only that when it's my turn I am able to face my fear and move beyond it into the hope of Eternal Life.

Thanks be to God that we are not doing the sanctimonious and tin-can-sounding Request for Healing that tries to deny the reality not only of Death but also of its often terrible process. Deenie appears to have accepted the fate she shares with us. When she finds her final healing, let it be in the arms of the God who loves her. And even if we did not know her--for I did not but I trust Jane absolutely--let us learn from her how to face what we cannot avoid. Anyone remember the words of the Serenity Prayer? Deenie is living them, and for that I thank her.

So many prayers for Deenie!

Prayers--and thank you for telling her story.

Thanks for the update, Jane. I had been wondering lately. So glad you'll get to spend time with her.
L.