+Rembert Weakland's memoir due out in late May 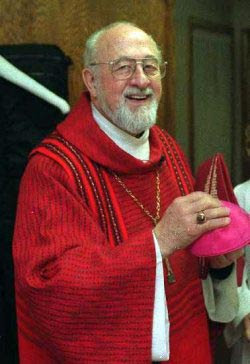 Rembert Weakland, O.S.B., retired Catholic Archbishop of Milwaukee, has a memoir coming out later this month.

I am glad he has written it. He is a good man. I was distressed at the way his former relationship got compared to the cases of abuse that were happening at the same time; he's no child abuser. He did something stupid, but that's not the same thing as being an abuser.

The Catholic Herald, Milwaukee's diocesan newspaper, has a context-setting article about the book.

Rembert and I met in the 1980s* and I consider him my friend. There is already media buzz about the book and there will be more. Let's read the book before making up our minds.

*In the context of work on the Catholic bishop's pastoral letter on economic justice.


A 7 p.m. postscript: It turns out there was an article in the NY Times today here.
Posted by Jane R at 2:52 PM

I saw the article in the NYT and worry for him. There seem so many so angry with him.

As you might imagine, much of the already-too-angry Catholic blogosphere is in a major lather over this one.