Good Friday: the life and death of Sister Dorothy Stang 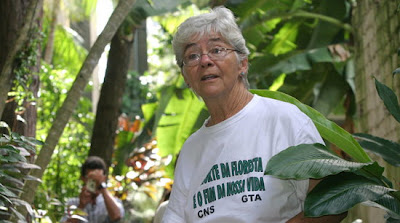 Yesterday evening I began my Good Friday reading, Martyr of the Amazon: The Life of Sister Dorothy Stang, by Roseanne Murphy.

Dorothy Stang, a Sister of Notre Dame de Namur, lived and worked with Brazilian peasants in the landless people's movement in the Amazon. She was killed there in 2005.

Apparently there is a new documentary on her. There was a segment about it recently on PBS's "Now" program. Even the New York Post has written about it.

Website for the documentary, "They Killed Sister Dorothy," is here, with beautiful images and music and a trailer and all kinds of information. Narration by (yes!) Martin Sheen.

Stang was from Ohio and the Dayton Daily News wrote a three-part series on her after her death.

* * * * *
In related news, the Episcopal Café has a series of Stations of the Cross up. The one from Central America (El Salvador) is haunting. (Do not look at it if you are a trauma survivor; it is made up of drawings of tortured men and women. It resides at La UCA - the Jesuit-run University of Central America.) Another one is for children. Yet another is a series from Kenya. (I'd posted an image from that one two years ago here.)

Last year I posted the Arcatao Stations of the Cross from El Salvador. (That's a different series from the one mentioned above.)

And the year before, more Latin American Stations --images by Nobel Peace laureate Adolfo Pérez Esquivel with words from Argentina-- and some Stations by a Tanzanian artist with words by a womanist theologian from the U.S. (The latter, in a book called Where You There? is a favorite of mine.)
Posted by Jane R at 11:06 PM