Death comes for the Archbishop: the forgotten Chaldeans of Iraq 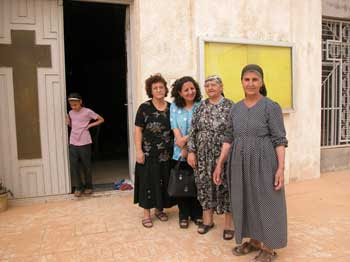 These are parishioners of St Elya Chaldean Church in Baghdad, one of about 52 local emergency shelters established by the Middle East Council of Churches (MECC)-ACT(Action by Churches Together).

Several acquaintances and friends have been keeping the Chaldean Catholics of Iraq in public view -- including Grandmère Mimi and Young Fogey in the blogosphere and Roberta Popara, O.P. on the Sister-L listserve -- but most of the public does not know this religious minority exists. (There were also Jews in Iraq, once an important group and now a handful. More on them in another post.)

Today Archbishop Paulos Faraj Rahho was found dead (yes, passive voice, we don't know who found him) near the city of Mosul. More from the BBC here and English-language Al Jazeera here. He had been the victim of kidnapping two weeks ago. He was 65 years old and in poor health. He was Archbishop of Mosul. 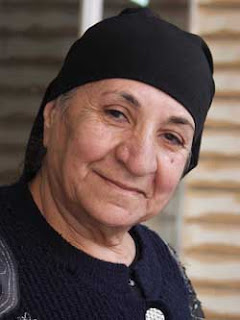 This is Theresa, one of approximately one million Christians in Baghdad (yes, one million -- at the time the photo was taken, 2003).

Except for the photo of the Archbishop, the photographs on this page are from the World Council of Churches. They are from a 2003 collection. We do not know whether the people in these photos are still alive. 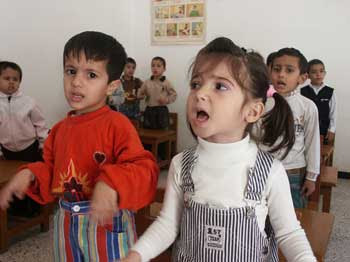 This picture is from before the war. The children are from a kindergarten class run by the Chaldean Catholic Church in Basra.

And here's a map of Iraq to refresh your memory (and mine) on the location of the cities.

Today the body of Archbishop Paulos Faraj Rahho was found dead (yes, passive voice, we don't know who found him) near the city.

We disagree on some big issues, but my friend Young Fogey has been a strong, consistent voice on the plight of Christians in the Middle East. Sadly, you're right that practically everyone -- in the media, in the public discourse about the war, etc. -- have been ignoring the Chaldeans, who are in terrible, terrible danger.

Yes, he's been very good on these issues. I'll add his name to this post, which I am in the process of fixing visually.