Miss Maya Pavlova is busy contemplating squirrel movements outside the study window and we are promoting interspecies understanding. So here, with deep bows and shoutouts to our many Dog People out there, including MadPriest, Clumber, Lindy (whose canine companion Rowan also blogs), Padre Mickey, Doxy, and many more, is the latest canine news. These are seriously cute pups, so prepare to drool.

1. My friend PeaceBang, a fine preacher if there ever one, and stage mother to clergy in need of sartorial uplift, has a puppy. More precisely, she and her beloved, known online as SweetieBang, have a puppy.

The saga began unfolding at Easter.

The puppy came home on Monday.

He spoke up on Tuesday.

Miss Ermengarde, the resident feline, has a few things to say about the new canine. She held a press conference today, on Cat Blogging Day.

Who can resist this boy? His name is Max. 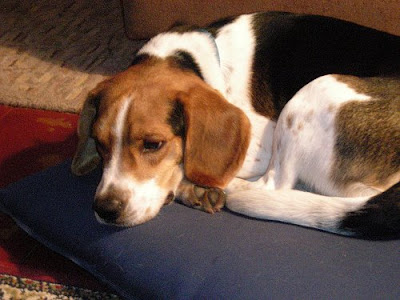 2. Iris and Josh of Greensboro Birds, who already had one dog, have gotten a second dog, or rather, he has gotten them. He just showed up one day this week and stayed. Have a look at his fuzzy face here, with the saga of his arrival. (I'm not posting the photo here because Iris prefers that one not lift her pictures.)

The handsome fellow's name is Tito and he is already posing for pictures with his new pal Happy. Iris and Josh are thinking CD album covers.

3. A friend and colleague, whose name I will not reveal because I haven't cleared this post with him, and who is an Episcopal priest, has an irresistible and rambunctious companion named --oh wait, I had better not give the dog's name either. Let's just call him Golden Boy. Golden Boy is young and enthusiastic and, well, still learning his limits. This week, he chewed on, you guessed it, a Book of Common Prayer. I mean seriously chewed. I saw it.

Maya Pavlova would never dream of doing such a thing.

I'm miffed. You left me off the list of dog people. I'm metamorphosing in to a volunteer (for now) dog walker and trainer. A refresher course is due on "What I Learned From A Dog." When Pushkin (cat) died, she took the other cats with her, even the ones I haven't met yet.

Oh my goodness! Sorry. I will correct this oversight immediately. I was thinking of people I first met (or so far only know) in the blogosphere. Also, I don't think of you as a Dog Person because of your long history with cats and of our many cat-centered conversations.

P.S. Don't get too miffed to admire the cute beagle puppy!

P.P.S. Plus I always think of Cid as Marie's dog, since he was originally hers. I must be stuck back in time before you began experiencing him as your dog too...

P.P.P.S. I also was thinking only of mono-species people, as in Dog People vs. Cat People. There you go, messing up my simplistic typology with your inclusivity.

What's not to love; Max is a darling! Please, do not fret because he likes to sing, or whatever, PB.

It's the Southerner in me, I 'spect, but how can I not love a hound dog? I just cannot stand the idea of a good dog in an apartment in town; it sticks in my craw.

I suppose this makes me another one of those "the more, the merrier" inclusivists. I have not yet consulted Miss Scarlett on this, and will not until the need arises. I won't invite any critter she can't whup.

Speaking of whom, you being a worldly person, I must ask your advice on her name (yes, another one), but this one seems more legitimate; if her Dam is Tessa (as she is), does this make her Scarlett Tessanovna? I do want to pay homage to her lineage somehow; I have discovered her breed was only introduced in the States in 1988, but has been known in Russia for a millenium or so.

Her sire was Kremlin, which I refuse to consider as a Patrynomic. Besides, she's a grrrl. Taint fittin'.

I believe Tessayevna is correct. But I only had three semesters of Russian in college and that was several years ago. Ahem. Also, I've never had to make a matronym rather than a patronym. So it might be Tessanovna as you say. The unreliable Wikipedia says in its entry on Eastern European patronymics that for women, in Russian, the ending is -yevna, -ovna, or -ichna.

I say go with the most euphonic and to hell with the rules. (I can't believe I said that, I the grammar nut, but you da boss of your own cat, or rather, she da boss of you.)

I can't believe her daddy's name was Kremlin.

You don't like Kremlinovna? True, Tessayevna is a little more fitting for Miz Scarlett.

The beagle, yes, is gorgeous. As for Cid, he started as Marie's dog, she still has the (literal) life-and-death choices to make for him as he gets old, but Cid and I have that bond that grows only from a healed misunderstanding. He's the reason for my Pauline conversion experience to dog-walker:-). Last weekend was first time out with the strange dogs, today is more. I forgot that in a shelter there are stories to break your heart. Cats or dogs. I got a Jack Russell and read his profile. Someone had shot him in the front left leg. The dog's name is Bullet. Right.... They got it out but he still has walking difficulties. People can be so wonderful to adopt our creatures, but then many of them land in the shelter because other people can be utter vomitous.

A recent test indicates "Tessayevna" is in the lead; perhaps a few more trials: I swear sometimes I believe Miz Scarlett T. is in deep cover from whatever the Committee on State Security is calling itself these days.

Follow-up on "Bullet" the Jack Russell who'd been shot. I went looking for him to walk him again, and it turns out that he got adopted during the week! Deo Gratias!

Oh, Ken, that is great! Deo Gratias indeed and thanks to St. Laika too. (See MadPriest's blog if you don't know who Laika is.) Also, St. Roch is always represented with his dog.

JohnieB, all cats are natural spooks, though they are also, contrary to popular belief, loyal and upfront about their loyalties.

Miss M.P. was a peach this a.m. I slept all morning and so did she. She doesn't do the "feed me at 6 a.m." thing. Very unusual. Don't tell her I said so or she might change that. It is grey and cool out after some glorious spring sun and high temperature, so it's good sleeping weather. And maybe she had a big work week too, but I kinda doubt it ;-).

Oh man, now that you've blogged about the dog, too, does that mean we really have to keep him? Oy. Well, he better behave himself then (or at least stop peeing on my roses!).