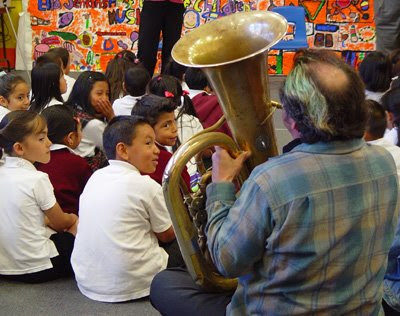 So, we've had a lot of end-of-life posts here, and it's time for some children. The blog Civic Center (as in the San Francisco Civic Center) has a delightful photo essay with running commentary about a program the San Francisco Symphony (sigh, I miss them even though I barely ever got there when I was an impoverished middle-aged doctoral student in the Bay Area during MTT's first decade as Music Director) runs called Adventures in Music. Thanks to sfmike for his report about it.

Adventures in Music, part I (Fewer kids in this one, but start there or you won't get the drift, and the final photo of brass players is priceless.)

ART TO THE PEOPLE!

P.S. In addition to the regular SFS website linked above, there is a San Francisco Symphony Kids' Site (SFSKS). Kultchah for the kids!
Posted by Jane R at 12:14 AM

Thanks so much for the links. I didn't really want to do this story, but a friend who works in PR at the Symphony sort of insisted that I check it out, and she was right. For some reason, I burst into tears in the middle of the little lecture/concert/demo just because whatever was happening was so cool, and my photojournalism was just an attempt to take people into the same place.

Wow, you posted as I was still fixing the post. Thank you again for a wonderful job of reporting. The photos were just bursting with joy. I went to my first concert (grown-up-type, choral, local choir performing a friend's composition, see a few posts below) in ages yesterday and remembered how much I love live music -- and how in this town (well, as in some SFS concerts) the audience at these things is mostly older, as in really older.

What a great way to begin my day- thank you Jane R and sfmike!

Thank you both for a refreshing morning, and to JaninSanFran for the Varley recommendation.