It's Edward R. Murrow's birthday! (with some Greensboro factoids) 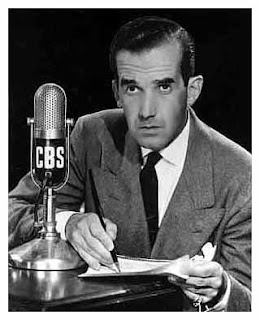 Well, who knew? Edward R. Murrow was born on the feast of Mark the Evangelist AND he's a Taurus.

(I had to get that in, I'm a Taurus too. As, by the way, is my friend Paul, a.k.a. the Byzigenous Buddhapalian. Our birthdays are just a day apart. And my new godson and I, as it turns out, have the same birthday! Grandmère Mimi, alert: the BB's birthday will take place while he is in NOLA. Write me off-blog at I'll tell you when so you can feed him a Sazerac. Also, as we know, he likes flowers.)

Murrow is one of our local celebrities here in Greensboro. We have four. (Hey, we're a small city. At least by my snooty standards.) Dolley Madison, O. Henry, Edward R. Murrow, and Joey Cheek.

So, from our fair city and its municipal website, I bring you...

Edward R. Murrow was born in Guilford County near Greensboro on this day in history. Although his family moved to Washington state a few years later, Greensboro has always been proud of its native son, who became a famous radio and TV journalist known for his broadcasts from London during World War II.

Yes, this is our bicentennial year in Greensboro.

The 1781 Battle of Guilford Courthouse (a couple of miles up the road from where I live - see also here) preceded the founding of the city, which is named for General Nathanael Greene. Greene also served at Valley Forge, and you can read more about him here.

Many moons later, the General (a Quaker, by the way) gave his name to a local downtown pub, Natty Greene's, and to the brewery that runs the pub.

Jane dear, you know too much. But you are very sweet.

Three cheers for the Taureans! Thanks for honoring Murrow.

I had forgotten that bit; he was, however, a good General, FWIW.