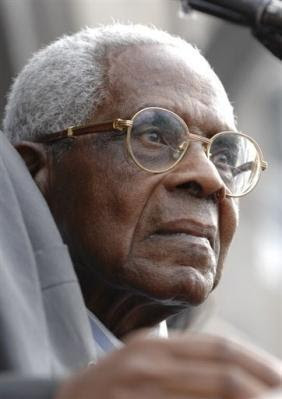 Fort-de-France, Martinique -- Poet Aime Césaire, one of the founders of the négritude movement, is very ill. I didn't even realize he was still alive... He is 94.

Better news story, the original one I saw, here, but it's in French so if you're not a francophone, you'll have to pick your way through it. The picture accompanying it is the one I have posted here.

More on Césaire and négritude here (in English) and here (also in English).

The other founders of the négritude movement are Léopold Sédar Senghor of Senegal and Léon Gontian Damas. Négritude, a cultural movement of Africa and the African diaspora, was and is the original black-is-beautiful movement in the former colonies of France in the African world. Interestingly and not surprisingly, some of its leaders were in touch with and sometimes influenced by literary figures of the Harlem Renaissance. Both Césaire and Senghor were statesmen as well as poets during their long and fruitful lives and are major poets in the French language. I know less about Damas and must go read up on him.

May Aimé Césaire's last days be gentle on the earth and may he hear the poetry of angels in his ears. In Caribbean French.
Posted by Jane R at 5:18 PM

Peace be unto him, and rest when the Lord calls to him.

I have to read more about them all, thanks for posting this.

Statesmen and poets... reminds me of many of the Latin American writers like Neruda, Marquez, Vargas Llosa, etc.

Imagine if we had statesmen - or women, or were poets, writers, artists.

Indeed. I was thinking the very same thing, remembering how we read Neruda here a week ago.