From the L.A. Times, naturally. 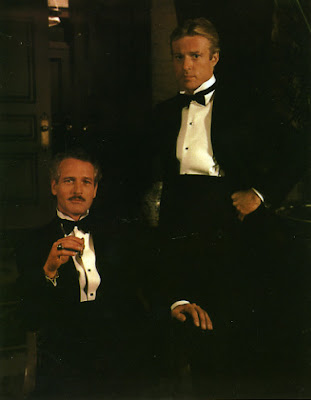 May the angels greet him and lead him into paradise.

Rest and peace to one great man.

And that is the best obit that I have read about him.

He leaves for me several wonderful memories.

First, the spaghetti sauce that kept me alive when I was living on my own 10 years ago. No, I did not eat it out of the jar.

Second, the peanut butter-flavored doggie treats that our dog adores.

Third, Hud. Indescribably great, as much for his interaction with Patricia Neal as for his own sullen sexiness (I met his operatic equivalent on Saturday, a Uruguayan bass-baritone named Erwin Schrott, who played Don Giovanni like I haven't see it played in over 40 years).

Fourth, a proof that even a great one like Newman can drop a bomb. His first movie, The Silver Chalice, I would call a dog, only I like dogs. He himself was wooden, monotonic, and a pretty boy. He was trapped in a cast so bad that only Jack Palance didn't look totally stupid. I read someplace that Newman for years was trying to repudiate the film, but didn't succeed.

His rudest and funniest movie: The Sting. I know, there are others. This one sticks with me because of a particularly rude moment that had both my wife and I almost in tears from laughing. Newman as the con-man Henry Gondorf (Mad magazine called him "Henry Goniff") shows up deliberately late to a poker game in a New York Central sitting room as the train goes from New York to Chicago. Totally throwing the dignified murderer Doyle Lonergan (Robert Shaw, and no relation to the Jesuit theologian), Newman strides into the game and says loudly "Sorry I'm late, fellas, I was taking a crap." It was the timing and Shaw's disgusted reaction more than the words themselves.

I shall miss that man. We all knew he was dying, there was sort of a silent death watch a few months, but the death itself has brought inevitable sadness and joyful recall.