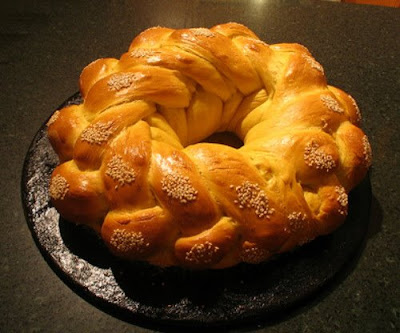 Tonight is the beginning of Rosh Hashanah, the Jewish New Year, and of the Yomim Noraim, the Days of Awe.

Tomorrow is Eid al Fitr (also transliterated Eid ul Fitr), the end of the Muslim holy month of Ramadan. After a month of fasting, there is a great feast. 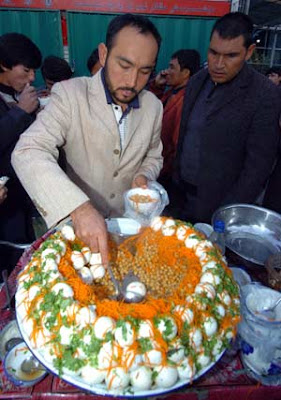 These holy days days do not always coincide. Both traditions are on a lunar calendar, so the feasts are moveable.

Plainfield Today, a blog based in Plainfield, New Jersey, has a lovely post (with pictures) from last year on the convergence (yes, last year too) of the two holidays. Plainfield has both Jewish and Muslim residents.

The BBC has a nice primer on Islam here.

The BBC primer on Judaism is here.

1) A round (rather than long) challah or braided loaf, a traditional bread for Rosh Hashanah. The round shape symbolizes the cycle of the year or perfection and completion. Credit here.

Rabbi Arthur Waskow of the Shalom Center sends too many e-mails, many of them marked "urgent," but that does not mean he doesn't send inspired letters. This is his greeting for the convergence of Rosh Hashanah and Eid al-Fitr.

This year, just as the solemn fasts of Ramadan end and Islam rejoices in its renewed connection with the One, the Jewish people meets the Days of Awe and of Returning to that same One with prayers and acts of forgiveness and reconciliation.

"Cousins, let us introduce you to each other!"

And then to turn together to another multitude, the Abrahamic family that follows Jesus, to wait with them for the season of Advent in which their own connection with the One swells into a birthing.

Many of us know from our small families that sometimes it is precisely our love for the same parents, the same home, the same teachers, the same children that can corrode into jealousy, anger, fear, violence.

And so it is with the Families of Abraham/ Ibrahim/ Avraham.

Sometimes in our history, we have lived together, sharing poetry, philosophy, politics. And sometimes -- now - the acts of some in both our families have embittered our relationships.

During this summer past, Phyllis and I (Rabbi Phyllis Berman, to whom I am married) - had the extraordinary opportunity to take part in two different interfaith gatherings that went beyond intellectual dialogue into deeper feeling and ensouling. Both gatherings were call together by Muslims. Muslims at amazingly different parts of the Muslim world:

One, called by the Guardian of the Two Sacred Places, Abdullah of Arabia, upholder of the Wahabi path and doctrine.

The other, called by Pir Zia Inayat Khan, leader of the Sufi Order International, the most universalist strand of the mystic Sufi orders.

The first gathering brought together many people who were for the first time meeting in such a way:

• Saudis and Pakistanis who had never met a Jew, and had no idea that there were Jews anywhere who both cared for the state of Israel and strenuously opposed its occupation of Palestinian territories;

• Muslims who sought dialogue with all the traditions of our planet, even those like Hinduism and Shintoism that classical Islam might have dismissed as idolatry;

• Christians of Euro-America who had painfully learned to respect Judaism but had never before opened their minds and hearts to Islam;

• Christians of the Middle East who had long ago learned to live with Muslims but were still possessed by ancient anger at the Jews.

Here the remarkable heart-opening came from the joy of new discovery, the happiness of doing what everyone knew God wanted but had never seemed possible before. It was precisely our awkwardness that suddenly filled with grace.

In the other meeting - the one called by Sufis -- were people who had for years learned from each others' wisdom, across all the evanescent boundaries of official religious life. Here too there was the remarkable heart-opening, but it came from a different place: from the depth, the breadth, of sharing. It came in unexpected laughter as people wove together different symbols and texts and stories into coherent fringes of connection.

There is much we need to heal. Into our American polity, in the midst of efforts for us all to discern the best direction for our nation in the most important choosing moment we have faced in a century and more -

Into that solemn moment of rethinking, some Americans in just the past few weeks have plunged a dish of poison, a film whose title is "Obsession" and whose content breathes obsession in its every picture-frame.

It is bad enough that a film rooted in fear and hatred of Islam was distributed in millions of copies as an insert in a number of major metropolitan newspapers. Even worse, the distribution seems to have been carefully aimed at the "swing states" -- - those of uncertain outcome in the coming Presidential election. It is as if the virulent anti-Semitism of Henry Ford and Father Coughlin had been directly injected into the election, say, of 1940. Was "President Rosenfeld" really a tool of the Jews?

The Shalom Center is in the midst of a careful examination of "Obsession," and we will have a full report soon. But now we will set aside the next few days for our own prayerful and contemplative searching into the Days of Awe and Reconciliation.

With blessings of shalom, salaam, peace -

Thanks for this lovely post, including the letter from Rabbi Arthur. I bet his wife, Rabbi Phyllis, is ultra-cool. (With a name like Phyllis, coolness is a forgone conclusion. Wink-wink.)

Would you like to know how drifting secular Jews who are married to lapsed Catholics and have confused children celebrate Rosh Hashanah? With an amateurish pot roast, an Entenmann's cake, and a DVD of Yellow Submarine.

Did someone say Entenmann's...

PJ you are killing me.

To one and all I say peace, salaam, shalom.

And regarding Obsession- see this post - I have already sent PJ and she left some words.

Stumbled upon this post, wonderful write-up on Eid and Rosh Hashanah. Thank you. The letter was very moving.

I will be celebrating Eid on Wednesday. I pray that God will shower His mercy on all of us. Much happiness to everyone who reads this blog too.

And peace to you, uja. Thank you for visiting. I just had a look at your blog and bookmarked it; I will read it again, I'm sure. May God's mercy be with us all.

Jane -- thanks for Arthur. i am filled with awe. (the non-capitalized i was a mistake but perhaps a good reminder of how small i am and how amazing that God regards me with kindness and love)