This is a music video, not live, but at least you can see the musicians.

To my ear, there are echoes of both Cuba and Louisiana in this one! So goes the gorgeous spread of music in the African Diaspora and its cultural companions.* 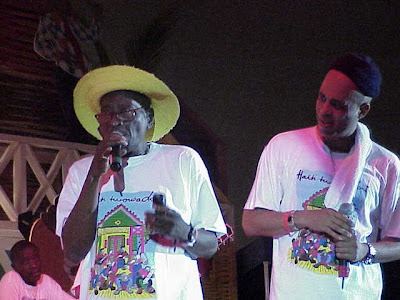 And pray for Haitians, who have already suffered grievously from Hurricane Ike, and for their and our Cuban sisters and brothers.

May the people dance again.

Haitian Twoubadou, a silky and romantic take on Haitian Compas. Twoubadou translates as troubadour and, as that designation implies, the style is more concerned with melody, lyrics, harmonies and acoustic instruments than some of its Caribbean competitors.

Twoubadou (from troubadour) music has a long and important place in Haitian culture, one that transcends rural-urban and class divisions. The term is used to describe singer-composers who accompany themselves or are backed by small string-based ensembles. These traditionally consist of one or two guitars, a tanbou (barrel drum) played with the hands, a graj (scraper) and a manumba, a large, box-like "thumb piano" on which the player sits and plucks metal tongues suspended over a sound hole. Twoubadou is derived from blending of the Cuban son brought back to Haiti in the early twentieth century by itinerant Haitian sugarcane cutters and Haitian meringue. The form has become deeply Haitian over the intervening decades, and most Haitians consider it an indigenous music. Twoubadou songs are expected to truthfully convey the bitterness and humor of life and love, often employing ribald and off-color lyrics. Some twoubadou singers have been the conscience of a generation.

Twoubadou groups can still be heard in Haiti at patwonal (patron's day feasts), during Carnival, at private parties and in hotels and restaurants frequented by tourists. Eclipsed by konpa and other popular styles that it helped to spawn, twoubadou has been taken for granted by Haitians until a resurgence of interest that began in the late 1990s. Even so, this delightful music remains virtually unknown outside the country.

Again, good easy music... ironic that they should be standing in the ocean which doubtlessly has made their lives miserable.