You know that as soon as I say I have something major to write and I'm going to stop posting, I start posting like a maniac. What's that about? Not just procrastination, though it is that. It also seems to prime the pump for other writing.

It has been a while since we have had a foodie post here. I have been eating simply of late and not cooking much of anything, which doesn't mean meals haven't been tasteful and nutritious. There was also a fair amount of take-out the weekend of the move.
Saturday, though, I went to both farmers' markets (one downtown, one near the highway and very different from each other), which I rarely if ever do. I hadn't been in weeks, so it was time. I also hadn't bought okra all summer, because I wasn't cooking, and with okra, you gotta cook.

There at one of the farm stands was some fine looking okra, and my Southern-transplant guilt got to me. What? A whole summer without okra? Impossible. I knew what I was going to make, too, and tonight, around 9-something p.m., I made it for dinner. Okra ratatouille. I invented it three years ago, the summer I moved here. Like any ratatouille, it's good both hot and cold. When you have it cold, the flavors are even more intense than the day before because they have had time to sit with each other. Don't serve it fridge cold, though. Like most good food except ice cream, it likes room temp.

Okra ratatouille works the same way as regular ratatouille, except that instead of zucchini and eggplant you use okra, sliced into little rounds. Start with olive oil, sauté the onions on not too high heat, because you don't really want them to get brown, or if you do, they should also get to a translucent phase and not burn. Then slice the okra and add it to the mix, and also a clove or two of fresh garlic, cut into a few pieces. You might have to add more oil. Add sliced tomatoes (the last not very pretty tomatoes of summer are great --I had some sorry-looking red ones and yellow ones too, the low-acid ones -- but a can of tomatoes will work too. I sliced in a tiny bit of a red jalapeño I got at the market a few weeks ago from a farmer who was selling assorted peppers of assorted levels of heat, just enough to give some kick to the dish, not the whole little pepper. I finished the dish up with some coarse sea salt, just a bit. The colors were beautiful: the okra got brighter green as it cooked, the tomatoes were bright (see above), and the onion added its pale yellow-white-clear color too. I used one humongous white onion, but that's probably three regular-sized onions. I had two servings and there is more of the ratatouille left for tomorrow or whenever I decide to eat it. Stores fine in the fridge.

Don't cook it too long. The okra should be cooked but bright green and the tomatoes still have some shape. The beauty of this is that the onions (especially if you have put the lid on the pan during the time the onions are sweating at the medium/low stage of things after you've gotten a bit of sizzle onto them) will absorb the slimy part of the okra, the juices of the tomato will help, and the okra will act as a slight thickener and you will have a good dish that isn't slimy but holds together .
This is what you get when you transplant a Parisian/sometime Californian to the South.
Enjoy. 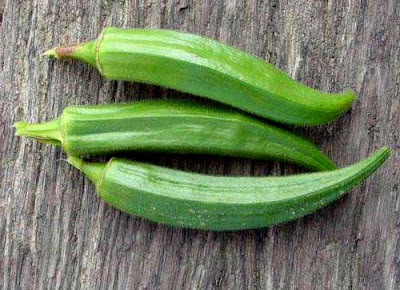 It sounds pretty interesting to me!

It was good! Really!