Another prayer, request, alas (and alleluia, for the holy communion of friendship)

More prayer. An old friend, Deenie, with whom I had been out of touch (no bad blood, just distance and busy lives), has sent a message through a mutual friend that she is very ill. She has been diagnosed with a very rare form of cancer which has sent tumors throughout her body. She is in a clinical trial at one of Boston's best teaching hospitals and also being treated through Chinese medicine. She is asking for my prayers and I ask you as well for yours and those of your communities. Deenie and our mutual friend and several other women were peace activists together in the 1980s and beyond and also were for years in the same writers' group. She was also one of the friends with whom I attended the consecration of the Right Reverend Barbara Clementine Harris, the first woman bishop in the Anglican Communion, in Boston. Both of us were Roman Catholics at the time. The event was, Deenie said, "like a Pentecost," and I quoted her in one of the articles I wrote. (I was there as both a person of faith and a journalist.) 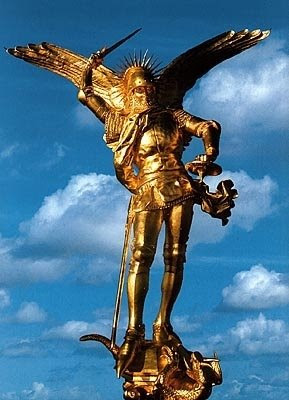 Remember Deenie (whose baptismal name is Bernardine - Deenie is her nickname) with all those who need healing. She is a fierce strong woman with a tender heart. Pray, friends.

The archangel above is Michael, because sometimes you just need a militant archangel.

The archangel on the second prayer request for Christy (and David) is Raphael, the healer.
Posted by Jane R at 11:43 PM

Prayers for Deenie...and more for Christy and David.

Those are some good powerful angels for them!

From me, as well.

Prayers for them all!

I invoke Michael and Raphael quite often.