This one is for friends of JohnieB.

So, JohnieB's internet connection went away. Now it is back.

However, the computer has gone kaput.* JohnieB is considering his options.

He's also getting an MRI as a follow-up on his kidney adventure of a couple of weeks ago, tomorrow.

3 p.m. is the time, so light your candles to the Blessed Mother then, or before if you prefer. 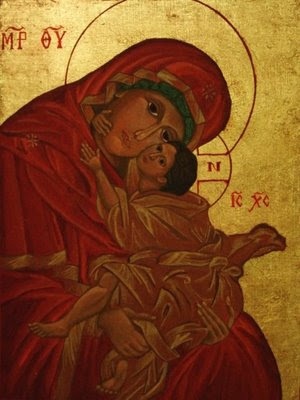 JohnieB is also in the middle of moving to new and more spacious digs.

The official move date is Tuesday. Miz Scarlett the Cat is not entirely amused.

JohnieB sounded fine on the phone, but he has a lot on his (usually quite gourmet) plate. Sending a few good vibes or leaving messages on his blog for him to find when he returns to the intertubes would be a good thing. (Hey, he's in Connecticut, so "a good thing" is the appropriate expression there in Martha Stewart Land.) Prayers too, if you're one of us church mice. Squeak!

* As a former Californian, I just had to make an astrological comment and blame it all on the fact that Mercury went retrograde yesterday.

What a gorgeous icon! Our dear Luis is gifted, indeed!

Oh, Mercury is in retrograde. taht explains it. Thanks Jane.

Good luck to you, sweetpea!!

Thanks for keeping us apprised, Jane.

Martha Stewart lives in Katonah, NY by the way. A twenty minute drive from my house... and yet a world (and many tax brackets) away.

PJ, I am shocked, shocked that you and Martha don't exchange visits.